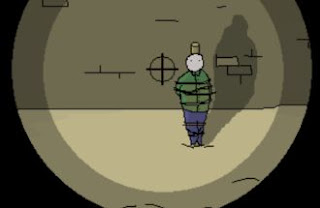 Jesse Venbrux’s Execution starts with three statements that could be thought of as some implicit artistic assumptions of videogames:

Your actions have consequences.
You either win or lose.
Do the right thing.

The game goes on to examine these assumptions in a minimalist style. All you see is a prisoner tied to a stake, and your only input method is a gun that you can move around and fire. The implication is pretty straightforward: you can only proceed by shooting the guy.

This kind of forced-choice scenario seems to be something that concerns gamemakers recently. In a medium where the player supposedly has the freedom to do whatever she likes, she will nonetheless almost always do what she has to in order to progress through the game; otherwise she’d have to quit. The great turning-point scene of Bioshock had a memorable play on this problem. Having been told that all your actions up to this point were driven by mind control, you might be inclined to rebel against the next instruction, which is clearly not to your benefit. But the game gives you nothing to interact with but the switch you’ve been commanded to hit, so what can you do? Game design itself, the scene implies, is a kind of mind control, in that it can trick you into thinking that an action forced by your environment was your own decision.

Execution takes a grumpier view of this scenario, by giving special status to the option you disregarded from the start: turning off the game. If you hit the Escape key before shooting the prisoner, you’re treated to a “You Win” screen, and the game closes. If the game gives you no desirable options, this suggests, you shouldn’t play it at all; either do the right thing or do nothing.

More interesting, though, is what happens when you shoot the prisoner. In this case you get a “You Lose” screen, and the game ends, but not before surreptitiously writing a small amount of data to your registry. Any subsequent attempt to restart the game gives you a disapproving message that “It’s already too late” and a view of the already-dead prisoner. The title reveals itself as a bit of wordplay; the execution of the prisoner was also the only execution of the game’s code that you’re going to get. Thanks to the registry key, not even reinstalling the game will help. Your actions have consequences, as the introduction states.

The slightly unsettling effect of Execution comes from this questioning of one of the basic abilities of traditional gameplay, which is that you can always reload or start over to see how things might have turned out if you’d behaved differently. Execution suggests that consequences are meaningless if they don’t have a lasting effect, so this aspect of gameplay clashes with one of the implicit artistic goals of gaming.

It’s a provocative statement, as it’s by no means obvious that temporary consequences are not really consequences. And while the inability to replay Execution may be startling, the consequences in this case aren’t exactly permanent either; you can always install the game on a new computer or delete the registry key (if you absolutely know exactly what you are doing).

This isn’t meant to be a nitpick, but a reminder that there’s a reason games tend to be replayable. Videogames are art made out of code, and the ability to repeatedly execute a set of instructions under different conditions is the reason code exists. In trying to find a loophole in this basic property, Venbrux calls attention to it, and to the artistic assumptions it challenges.