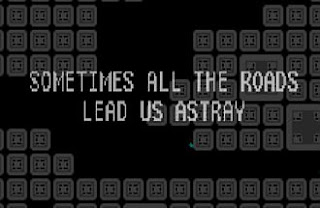 Previously, in reviewing Execution, I mentioned that gamemakers seem to be concerned recently with the issue of choice in linear game design. That is, while gaming seems to be all about agency and free choice on the part of the player, this freedom is constrained by the fact that gamers will always make a choice that progresses the game. Developers can easily force a player into a desired behavior by making it the only way to move forward.

Execution attacks this problem by making quitting into a meaningful action. A different but related strategy is at work in Tuukka Virtanen’s Seven Minutes, which makes inaction into a meaningful action. The game initially seems to be a straightforward platformer with a seven-minute time limit. You move through a series of increasingly frustrating and death-prone screens while a giant head follows you around screaming about what a disappointment you are. This is, obviously, fantastic. Your reward for reaching the end is death, but only after more haranguing from the giant head, who is furious at your futile desire to explore and move forward.

If, on the other hand, you stay on the first screen and wait out the seven minutes with nothing to do but impale yourself on spikes over and over, the giant head rejoices and rewards you by making you a giant head as well.

Like Execution, Seven Minutes screws with probably the most basic assumption of gameplay: you have to do something to win. The effect in Execution is to make you feel guilty; why do you try to progress in a game at any cost? Perhaps this is a fault in your character!

Seven Minutes, on the other hand, has the effect of confusing the issue of exactly what it means to progress. If you sit around in the first room, you’re told that you won. But you didn’t do anything! If you go all the way through, you lose – but what weight does that have? You applied your platforming abilities to a number of challenges and succeeded in completing them. Does a character in the game have the authority to say that you failed, despite all evidence to the contrary? In its weird way, Seven Minutes unpacks the frustration that results from games where the story and the gameplay are disconnected or at odds with one another, although it plays this frustration for mostly comic effect.