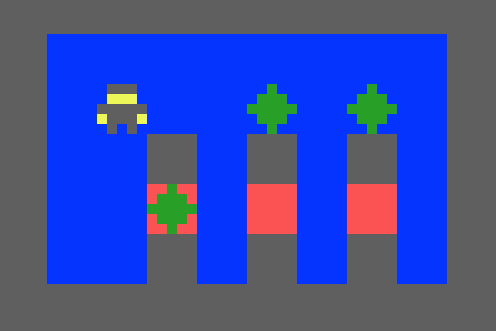 Just a few short reviews this week. I had the bad luck to run into a few more buggy/unplayable games than usual. Comes with the territory, that. On to the games that worked!

Block Push Championship
Another great puzzler from Stephen Lavelle. One of his favorite maneuvers in these type of games is to put you in control of an unwieldy set of objects spread out in space, instead of a single point-based avatar. (Other examples include Constellation Z, Whale of Noise, and The Rose Garden.) Block Push Championship does something similar with a Zelda-style sliding-blocks puzzle, by having the blocks attach to you and each other every time you touch them. As with most of Lavelle’s games, it’s easier to figure out how to play the game than it is to describe your strategy. Pure procedural learning!

Don’t Go Alone
A Ludum Dare entry by pgil that puts you in the shoes of the escorted NPC on an escort quest. It has a Little Red Riding Hood theme, and the contributions of the powerful hero, while helpful, are not entirely welcome. After a point, his indiscriminately flung attacks start to hurt you too, and he keeps stealing your potions. It has a rushed ending (as pgil admits), but it’s a clever idea.

Vicious Cycles 2011
Like Planescape: Torment, this is another case of a game that turns the failure-restart cycle into a part of the storyline. In this case, you play a time traveler whose job is to maintain a particular timeline by disarming a bomb. Failing to prevent the explosion loops you and your supervisor back to the beginning for another try. You pick up information in failed timelines that you can use to solve the puzzle in the successful timeline. It’s tightly plotted, and the little bits of information you pick up about the game world are kept in the background. Nice stuff.