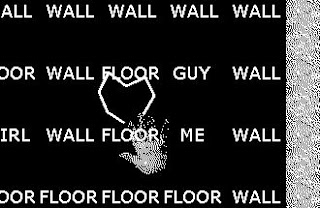 Interaction in games can be roughly divided into two major parts: the actions that can be performed and the control scheme used to trigger those actions.  Intuitively, we often consider the ideal control scheme to be one so natural that it becomes invisible, so that your intentions lead to in-game actions without any thought spared on the process in between.  Forgotten fingers, as Michael Abbott puts it.  And indeed, games of this kind – Edmund McMillen and Tyler Glaeil’s Aether or Jenova Chen’s Flow, for example – can create a particular sense of calm freedom which is uniquely pleasurable.

But that’s not to say that there are no pleasures associated with difficult or unnatural control schemes.  To use an oft-cited example, the frustration associated with controlling the horse in Shadow of the Colossus goes a long way towards establishing him as a character rather than a transportation mechanism.  And unnatural control schemes are an integral part of both the style and meaning of Stephen Lavelle’s Signifier.

Like his earlier Mirror Stage (review), Signifier is a disorienting, evocatively ugly piece with psychological themes.  In this case, the game is concerned specifically with perception and action, and how we learn to do both through social conditioning.  The game, which is very brief, takes place on a series of simple tiled levels, each of which contains some walls, other characters, or objects.  These are originally represented by graphics, until your mother teaches you to see them as words.

She also starts teaching you how to interact with these representations of objects, at which point Signifier‘s very strange control scheme comes into play.  You move around with the arrow keys (no WASD option), click through dialogues with the spacebar, and perform various demonstrative mouse gestures that represent social actions.  This is a pretty untenable control scheme on a standard keyboard/mouse setup, and forces regular shifts in your hand positions as you go through a level.  It would be fine without all those mouse gestures.  But each time you move, you have to announce which direction you’re moving in; you have to announce via gesture when you move away from another character; and you get a few other one-off gestures that would normally be handled via some context-specific “use” button (such as the spacebar you’re using to click through dialogue anyway).

But this is the point, after all.  Social signals, such as the pleasantries that end a conversation, can be considered as functionally useless and taking up a lot of unnecessary energy, distracting from the more essential business of moving around and getting laid.  Embodying them as an annoying piece of interaction is a clever metaphorical use of the control scheme, a part of games which doesn’t get to carry meaning all that often.