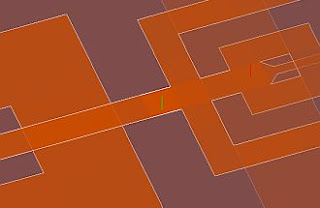 Stephen Lavelle’s Mirror Stage is a trim and elegant little piece about exploring kaleidoscope patterns.  While there’s not much more to it than that on paper, the aesthetic effect outstrips the simplicity of the premise by a surprising amount.  The game builds up a lot of appealing disorientation through the design of kaleidoscope levels full of weird angles and unsettling transitions from tiny spaces to giant ones.  It’s not a pretty or smooth game, with its Logo-esque graphics, eye-searing fonts, and awkward world-rotating controls, but its weird style adds to the disorienting atmosphere.

It is also similar to Coil (review) in that it sets up a feeling of dissonance by alternating short games and vaguely related bits of text.  Mirror Stage is separated into chapters, each telling a different story made up of a series of episodes which pair a piece of introductory text with a short level.  Unlike in Coil, these bits of text have the more straightforward function of hinting at what your objective is in a given level: avoid an enemy, explore all the segments of the level, find an exit, and so on.

There are a limited number of these objective types, but the text interprets them in any number of ways.  One story is about a marriage, one is about a person leaving home for the big city, one is just a collection of brief sense memories.  Having come up with a simple, abstract game concept, Mirror Stage goes to town with all the different ways you can use that concept as a metaphor.  It’s a very playful approach to game narrative, and I wonder why it isn’t more common.  Why should a game have a single story throughout?  Why aren’t there more anthology games like this, with a single set of gameplay mechanics applied to a variety of contexts?  In Mirror Stage, at least, it proves to be an effective way of exploring what the mechanics can mean.