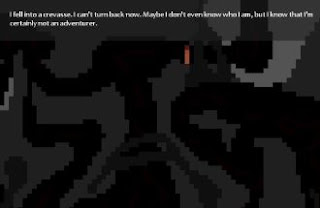 Kévin Soulas’s Darkfate is a quiet little exploration game.  You move your avatar, Chris Freeman, around a series of large atmospheric pixel environments, and at certain locations you trigger a bit of story text that is presented as notes in Freeman’s journal.  Pretty standard stuff with some nice music and mood.  The help text, however, contains the following rather provocative artistic statement:

You can control the game character – Chris Freeman – using the directional keys.  To jump, you have the choice to use either the “up” key or the spacebar.  In game: press escape to go back to the menu.

No interaction is possible in Darkfate. […]

Which does raise an interesting question: is exploration interaction?  Soulas seems to think not.*  If this is the case, then, what separates exploration from all the other things you can do with a game?

I suspect that what Soulas (or whoever wrote the help text) meant by this is that there is no way to take actions that affect the environment.  One way to separate exploration and interaction is by defining interaction only as that user input which changes something in the game world, while exploration is that user input which exposes more of a world while keeping it static.  So Freeman can move around his world, but he can’t act on it.  This sounds at first like a pretty reasonable taxonomy.

Here’s the thing that’s weird about this as regards Darkfate, though: in this game, it is hardly a stretch to say that you do change the world by exploring it.  The plot of this game is basically that you are a scientist who created a time portal, and over the course of the game, you explore the same area over and over in different time periods.  This is all perfectly linear; you travel through the area until you get to the time portal, jump into it, and spring up in another part of the area in another time.

One way to look at this is that you are going to a new part of the world every time you jump to a different time period.  But looked at from another angle, you’re moving around in a single world which you keep changing by jumping into the time portal.  This makes the difference between interaction and exploration a little fuzzier.

So what do we mean when we talk about interaction?  It is common to talk about games being more or less interactive, and the judge or compare them based on this.  But I’m not sure we’ve quite hammered down what we mean by “interactive” yet.  The Darkfate example, at least, suggests that how interactive a game is depends a great deal on how you define the game world, and that definition can be fluid.

* I should note that Darkfate is originally in French and the text was translated by someone other than Soulas.  However, in the original help text, the word used here is “interaction” as well, and I’m assuming for the sake of argument that there’s not a huge difference between the French and English meanings of the term.