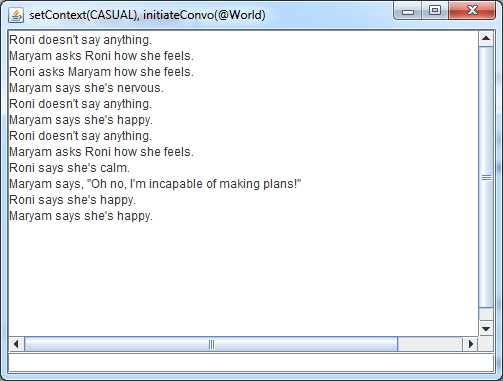 Fuckin’ Shakespeare, I know. But this insipid nonsense represents an important step forward for Mouthwash, because Maryam (an NPC) is now capable of having goals: in this case, making Roni (the player character) happy and expressing her own emotions. She’s also capable of taking simple steps to meet those goals, provided she has access to a skill that will instantly produce the intended effect.

What’s going on in this exchange is that Maryam initially has the “make Roni happy” goal. Since she doesn’t know Roni’s emotional state, she uses a skill (Query Emotion) that will give her that information. Questions, when successful, have the effect of giving the listener the goal of providing the given information to the speaker. So when Roni dodges Maryam’s query with one of her own, Maryam now has the goal “express my emotion.” She does so, and is now happy because she achieved a goal. This also makes her old “make Roni happy” goal the new active goal, so she asks for the information again, and this time gets it: Roni is calm.

And that’s where things fall apart, because Maryam doesn’t actually have any skills that can make Roni happy. The bit where she says “Oh no, I’m incapable of making plans!” is just an error message triggered when the agent can’t generate any moves. (Roni ends the conversation by lying, but that’s not important right now.) This is a point in the development of this system that opens up a few questions, which I’ll be tangling with for the next week or so. Namely:

1. How should skill effects work?

2. Should I have a class system or not?

Question #3 is going to take some trial and error more than anything else, so let’s put that aside for now. Questions #1 and #2 are a little more philosophical. I intended from the start to have classes in Mouthwash, but I’m starting to question that. There was a bit of talk on Twitter last night about Skyrim‘s abandonment of classes in favor of pure skill-based character development. It sounded like a good idea to me – god knows I’ve never played an Elder Scrolls game with anything other than a custom-classed character – and I started wondering why I was so stuck on classes in my system. I suppose I’d always thought of it as a way to organize skills and make the possibility space of character development less intimidating to a player, especially given that this is going to be kind of a weird system. But maybe that’s unnecessary, and I can get that organization with skill trees without putting up walls between classes?

The most urgent question is #1, as I’ll be working on it today. At this point, since I’m just testing things out, skills are always successful. But pretty soon I’ll need a way to make that success dependent on character ability and the situation. I’ve always figured that I’d use a quasi-D&D-ish system for skill effects. That is, there’s some chance of success for each action based on the stats of the speaker and the listener, plus any other buffs or debuffs in effect. But then I imagine a big conversation with more than two speakers, all with potentially conflicting goals and play styles, and I wonder if there’s not enough uncertainty in the dynamics of that system without dragging random rolls into it.

So, what do you think of classes vs. skill-based systems? Is there a good way to design a system that takes character stats into account without using dice rolls?  Let me know your thoughts!