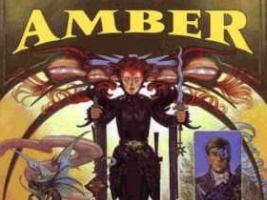 Last time I checked in with you guys about Mouthwash, I mentioned that I was no longer sure I wanted to use D&D-style dice rolls to determine skill effects, but didn’t know what to replace it with. On Twitter, Stephen Winson suggested I look into a diceless tabletop roleplaying system based on Roger Zelazny’s fantasy series The Chronicles of Amber. So I did.

It’s called the Amber Diceless Roleplaying Game, created by Erick Wujcik, and I was taken with it pretty much immediately. I read through the manual over the last couple of weeks and came away pretty intrigued by the concept. (If not by Zelazny’s books, which appear to be remarkably awful if the excerpts in the game manual are representative.) There’s a lot to the system, and much of it isn’t something I’m interested in copying. But I love how it handles determining the success of actions without using dice. Having read the manual, it’s actually both simpler and more nuanced than how it’s described in the Wikipedia page.

Here’s the basic idea: anytime a character tries to do something and is opposed by another character, you look at the difference between their relevant stats. The amount of that difference determines the extent of the effect. So, for example, if they’re wrestling and character X tries to break character Y’s neck, you compare X and Y’s Strength attribute. The Game Master (GM) might determine the outcome as follows:

As I said on Twitter and in comments on the last post, I suspect that in practice, with a human GM, this probably results in the GM deciding whatever and a lot of subsequent arguing. But with a computer taking the role of the GM, this sounds fantastic to me! In a way, this is what D&D-style systems do in a very roundabout way. If your stats match up poorly against an opponent, you’re more likely to miss or do very little damage; if they match up favorably, you’re more likely to do a lot of damage. Amber just does that in a deterministic way, rather than using probability represented by the dice roll. As of now, I plan to adopt a similar system in Mouthwash: ranked versions of every skill effect that are selected based on stat disparity.

My new obsession has led to a lot of debates with my boyfriend about what it means to abandon the element of randomness in a game like this. He’s more skeptical about the idea than I am, and worries that an essentially deterministic system will inevitably lead to players finding a single optimal path and running for it. To which I say, eh. I’d rather make that path hard to get to by designing a complex system, rather than introducing a bunch of randomness. After all, the randomness in a D&D game is there to represent all the subtle environmental factors that a human Dungeon Master can’t hope to calculate. The more well-simulated that environment gets in a computer game, the less necessary the dice rolls become. If your character can physically move around a space with a complex shadow-and-lighting model, and you can simulate the visibility of the character to NPCs using that model, then you don’t really need to roll dice for stealth checks. What does the dice roll add at that point?

Of course, that means I’m putting a pretty heavy burden on the complexity of the game system. And that’s starting to give me headaches. Complexity is great, but only when it feels like the system hangs together tightly. Otherwise it’s just chaos. So far I haven’t thought seriously about how to get things to hang together. How do emotions affect viewpoints? How do viewpoints affect goals? Where do relationships fit in? I’ve just been designing all these separate pieces in a pretty divergent way, and not looking at the big picture. That’ll have to change.

The holy grail is that system that’s easy to learn and hard to master, and fun to experiment with in between. Manageable complexity. That means a big picture that a player can easily grasp with lots of interesting details that aren’t obvious right away. It’s a tall order, but one that I’ll be better off working out sooner rather than later. So what’s the big picture of Mouthwash? More on that when I figure it out!