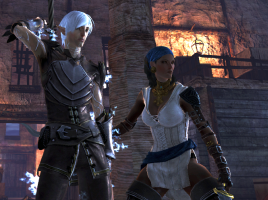 Readings: Outside the Lines

Holy crap, I’m back! And I’ve even had time to read things! Here are some of those things.

First off, Kirk Battle brings his uniquely legal perspective to explain the difference between playing Magic on a tabletop versus a computer in a Kill Screen post called In Brief: Who Rules the Rules? He makes a convincing argument that the change of medium changes the nature of the game. It’s particularly interesting to me, given my recent curiosity about adapting the Amber tabletop system.

Meanwhile, the inimitable Mattie Brice has been strapping on her reasonable female armor and taking on the patriarchy on two fronts this week. First, there’s a piece at PopMatters about the tragic lack of male sexualization in videogames. It’s a good reminder that increasing equality in pop culture really isn’t about removing types of expression (the usual PC blah blah complaint) but about opening up types of expression that aren’t currently available. Also, boners.

And over at Kotaku, Brice baits the worst of the commentariat with Why I Don’t Feel Welcome at Kotaku. They promptly prove her point by coming up with (so far) 819 ways to say, “Jeepers! If the only community I feel accepted in starts openly including people who aren’t exactly like me, how can I be sure they’ll still accept me?!” Adult society continues to not give a shit about their cry-cry faces. If you visit the comment section, do bring a copy of @fireholly99‘s Sexism in Games Bingo. Make a drinking game of it, perhaps.

Finally, there’s a really interesting exchange going on between Brendan Keogh and John Walker about Modern Warfare 3. First Walker had a negative review of MW3 that went so far as to call it an “un-game.” Keogh responded with a defense that argued Walker was approaching the game wrong, and Walker re-argued his point in Why Modern Warfare 3 Remains an Un-Game.

What’s fascinating to me is that this whole debate seems to illustrate something Dan Cox and I have discussed regarding the designer’s “ideal player.” The core of Keogh and Walker’s disagreement is that Walker thinks MW3 is paced horribly and constantly blocks him from doing what he wants to do, and Keogh thinks it is paced magnificently and responds to his every desire.   I haven’t played Modern Warfare 3, but my suspicion is that, like the Halo games, it has been play-tested within an inch of its life to get that pacing calibrated perfectly to the behavior of the average player. Keogh has the good fortune to fall comfortably within that average; Walker does not. As a result, Keogh feels like a god while playing; Walker feels like a pawn being jerked around.

The really amazing thing is that it sounds like Walker is only slightly off the average. It’s not like he wants to throw down his gun and choose pacifism, or even choose his own strategy for each mission. The things that bother him are the timing at which an event triggers or whether or not he can open a door before another character arrives. Very, very small deviations from the ideal player the game is designed for. And yet, as Adrian Forest put it in a response to Keogh on Twitter, Walker “does not seem to have played the same game you and I seem to have played.”

That’s the peril of designing for an ideal or average player: someone’s going to get left out in the cold. At the same time, it sounds like people who fit that ideal can have a pretty rapturous experience. In any case, there’s an unusual amount of connections between the posts I’m linking today. How do you deal with deviations from the norm? What do you lose and gain when you choose to design for a specific kind of behavior?