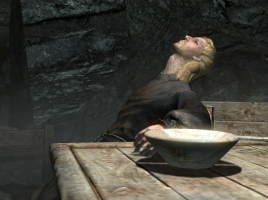 You know, in future, I should just be honest and go on hiatus during the work crush between mid-October and mid-December. Anyhow, I’ve got a bit of a links backlog to get through, so let’s get to it! This set of readings sees the player at war with the text, other characters, and the player character itself.

Choose Your Own Enemy, from Jay Barnson of Rampant Coyote, discusses the possibility of extending a morality system to shape the villain of a story in reaction to the hero’s actions. In theory, this could make the story more meaningful by presenting the villain as everything the hero opposes, or create a Batman/Joker scenario where the villain is a dark mirror of the hero. Its a clever twist on the idea of the hero’s actions affecting the story. More importantly, it’s a very gamelike approach to a classical storytelling trope. I’d love to see this implemented, even in a small way.

In Cinematic Action Gunplay, Sparky Clarkson makes the argument that the difficulty of Uncharted 3 hinders its presentation of the player character as an invincible action hero. Others have commented generally that the Uncharted franchise makes an awkward fit between its cutscenes and its gameplay, but this is one of the most cohesive arguments I’ve yet seen on why exactly that is.

Michael Abbot writes Who Needs Winners? on a subject quite dear to my heart (and quite common on my Twitter feed): the fact that differences in play styles complicate judgements that compare one design philosophy to another. This is a difficult question that game criticism needs to keep grappling with. We have to keep player variation in mind when developing critical judgements, but we don’t want to throw up our hands and yell WHATEVER FLOATS YOUR BOAT either. Abbot proposes a simple classification of game storytelling styles with different goals, which I think is a good start. Getting a sense of what different styles are and what they aim to do will help ground those critical judgements in the long run.

Just designing for a variety of player preferences isn’t necessarily the answer, either. In his piece on Skyrim and RPG anxiety, Rowan Kaiser digs into how, by trying to be open to varying play styles, the game makes any one of those play styles feel like the wrong one.

Following on the theme of player/game dynamics in criticism, Eric Swain of The Game Critique has a terrific post tearing into some criticisms of his criticism of Limbo, a game for which I share Swain’s lack of enchantment. Swain argues against defenses of the game that rely too heavily on unsupported interpretations in a reminder that, even with player variation, a game is still a stable text that puts constraints on the range of experiences.