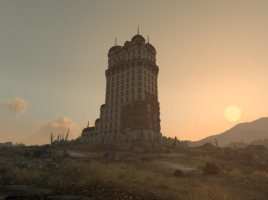 In my last post on tragedy, The Wrong Ending, I presented what I saw as an essential problem of tragedy in videogames: an ending where things go badly is often seen by players as wrong, and therefore in need of fixing. This makes it hard for a tragic ending to seem like a valid choice for players. I also promised that I’d be back to discuss some questions I raised at the end of that post:

In this post, I’ll be discussing some games that pull off tragic storylines, with varying degrees of success, and how they fit into strategies for addressing the wrong ending problem. These strategies all boil down to addressing the problem of how to keep a player from trying to fix what they did wrong. The games I discuss are ones I’m familiar with, and by no means an exhaustive set, so please do comment with other examples and strategies that don’t fit these four types. Spoilers for both Mass Effect and both Dragon Age games, Fallout 3, and the indie horror Downfall follow after the jump, although I’ll keep them as ambiguous as possible. Dan.

We Were Always Doomed

The crudest strategy for getting players to pick a tragic option without feeling that they need to fix their choice is simply to present a situation with no good options. This is a favorite of the Dragon Age series so far. The ending of Dragon Age: Origins, for example, gives you several choices, but the best you can say is that one of them appears to be putting off the disaster until a few sequels down the line. Dragon Age 2 is even blunter in forcing you to pick the lesser of two evils and making it clear that the world is boned either way.

The advantage of this strategy is that you might not feel as though you’re missing out on the “best” ending, since the options are just bad in different ways. This is also a disadvantage, however. If there isn’t a better path visible from where you’re standing, the emotional impact of the tragic ending won’t hit as hard. Tragedy isn’t just the feeling that things went badly, it’s the feeling that things went badly and you could have prevented it.

That said, players may be inclined to perceive a “right” ending among any set of varying possibilities. This seems to be the case with Dragon Age: Origins, which I believe makes it less successful as a tragedy for many players. That doesn’t mean that they agree about the right ending, however. Tossing the question out to Twitter revealed a wide range in what players perceived as the best or canonical ending from Dragon Age‘s eight or so possibilities. This wasn’t necessarily based on which was the happiest ending, but rather, factors like how interesting the ending was, dialogue bugs that revealed default conditions, and beliefs about what the morally right thing to do was.

Players have different criteria by which they determine the right ending and whether they’ve deviated from it. Learning more about those criteria and how to exploit them is an intriguing possibility for increasing the emotional impact of a tragic ending.

To some extent, the sense that one of Dragon Age‘s endings must be the right one derives from game conventions. We’re used to there being a good ending and some bad endings; in many older games, these endings would be associated with different point values that made this ranking explicit. You still see this in retro adventure games like A Tale of Two Kingdoms, but for the most part it has vanished from AAA games. Still, old habits die hard.

The Tenpenny Towers quest from Fallout 3 is a killer example of a tragic storyline that directly exploits this convention. The quest initially appears to have two bad endings and one good one: a compromise solution that makes everyone happy. When I played the game, I worked towards this solution and traipsed off into the Wasteland, smug in my good karma and diplomatic abilities. When I heard on the radio that things had gone horribly at Tenpenny, I furiously assumed that a story flag had been set incorrectly, and ran back to check on the bug. But all that had happened is that one of the factions had taken my compromise solution as an opening for an attack. Plausible enough, and a tight little tragedy where my tragic flaw was naivete.

This is a trick that may not work forever, should conventions change. For now, though, it’s a clever way to treat the player’s search for the best ending as a solution rather than a problem. Like the Dragon Age strategy, it uses a lack of good endings to push the player into a bad ending. But making one of those endings look better avoids the apathy that can arise from the explicitly “damned if you do, damned if you don’t” presentation of Dragon Age 2, and makes the player feel more responsible for how things turn out. For what it’s worth, it’s possible that the Origins ending is trying to pull this trick at a much longer time scale, which brings me to the next strategy.

If the basic problem with tragedy in games is that players want to fix things they did wrong, there are two obvious ways around that. The first is to make things unfixable, which is what the first two strategies do. The second is to make fixing things really, really unpleasant. That lies at the heart of strategies that put a great deal of game time between the tragic mistake and its consequences. By the time you realize what you’ve done wrong, it’s too late to go back and change things without repeating a great deal of the game. Replaying the game is a harsh punishment for players, since it’s both annoying and severely breaks immersion. Putting enough time between mistake and consequence almost guarantees that the player will give up and live with the consequences.

A straightforward and brutal example of this strategy is found in the indie horror game Downfall, which unfortunately seems to be unavailable for download at this time. (For this reason heavy spoilers will follow, since I can’t expect others to have played it.) Downfall is a stylish point-and-click adventure game in which you mostly play as one character. At one point, the lead is buried alive in a coffin with a shotgun while scrabbling noises are heard outside. This being a horror game, you’re inclined to believe the worst about what’s coming to get you. The scrabbling gets closer, and you’re suddenly given the choice to fire the shotgun or not. As I recall, you have a limited amount of time to make this decision, and while the timer ticks down, nearby ghosts taunt you about the monsters outside. It’s stressful. For what it’s worth, I fired.

Whatever you choose, the game abruptly cuts to an entirely different character and her own problems. You play as this character for quite a while, learn her backstory, and get to know her. She’s being guided by some kind of spirit on a quest of her own. Eventually it becomes clear that the endpoint of this quest is digging up the grave where the protagonist is trapped in order to free him. Dread sets in. Indeed, if you chose to fire the gun earlier, you blow your new friend’s head off right as she saves your life. For good measure, her headless corpse follows you around for the rest of the game.

I felt terrible. I wanted to take my decision back. But I also didn’t want to play through twenty minutes of goddamn point-and-click adventuring over again. So she stayed dead, and I went on feeling guilty about it. The tragedy hit, and all it took was a bit of time.

Other players may have more fortitude than I in this case, and there’s no guarantee that twenty minutes or so will do the trick. But as the decision-to-consequence distance increases, fewer players will be willing to go back. This appears to be one of the operating strategies of the Mass Effect series, where many decisions made in the first two games will seemingly only have their full effect in the final game. Stretching the consequence distance across eighty hours or more leaves only the most devout players willing to go back in time to fix things (what’s up, my Twitter feed). Others will prefer to just live with the consequences of their actions, even if they get a darker ending for it.

A variation on this strategy is also used within the first Mass Effect, in the scene in which your party member Wrex can be killed. It’s easy to avoid this happening if you’ve put enough skill points into one of your persuasion talents. However, many players who focused on combat skills instead found themselves unable to save Wrex. I find this to be a particularly effective strategy, since it follows not from a big explicit decision, but from a series of small choices over time about how to build your character. This makes it more difficult to go back and try again, since the point where things went wrong may be hard to identify. It also feels more earned, since it honestly follows from the type of person you chose to be. Your character’s flaws caused this.

Where Did I Go Wrong?

The scenario surrounding Wrex’s death is unusual among the storylines I’ve listed in that it doesn’t hinge on a single obvious decision point. Nonetheless, the game’s interface does explain where you went wrong: not having enough persuasion skill means that the conversation options that avoid bloodshed are visible, but disabled. You could push this strategy further by removing that explanation. A character would die, and you would feel like you could have avoided it, but you might not be clear on precisely where you screwed up. This is one last strategy to keep the player from fixing the tragic event: prevent them from knowing how to fix it.

It’s the strategy used to a degree in the ending sequence of Mass Effect 2. Prior to this sequence, the game tells you repeatedly that getting more loyal party members means that you increase your chances of survival, but that’s all the information you get. When the ending arrives, you’re thrown into a rather messy mix of loyalty flags, decisions, and random rolls that contribute to whether or not a given party member makes it out alive. By replaying the sequence and comparing notes with other players you can figure out the possibility space and get a perfect run, but on an initial blind playthrough there’s too much going on to easily trace your mistakes.

This is a great strategy in theory, and I found it effective myself. I liked the feeling of being overwhelmed and having events going awry despite best intentions. But that “comparing notes with other players” thing is a bit of a fatal flaw. Every game has a FAQ, and if you give players an ambiguous system, they will always figure it out eventually. And some players will always be tempted by the prospect of getting the right ending, even if (or especially because) it’s hard to get.

At heart, pulling off a tragedy in a game is about manipulating the player into accepting a situation they don’t want while still making them feel responsible for it. This is no small feat, but it’s not impossible by any means. None of the examples I listed are really immune to the basic “reload and fix it” issue that threatens to rob game tragedy of its impact, but they all suggest methods for making that solution less desirable. Digging into why they do and do not work might lead to better strategies down the line.