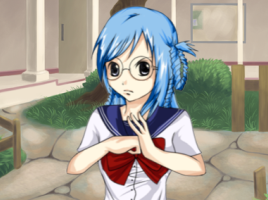 I spent a long time trying to figure out Harvest Moon: A Wonderful Life. It had an unusually deep simulation with a lot of random variables, so I dug through a lot of FAQs to figure out what the hell was going on. This being the work of Harvest Moon fans, the FAQs tended to editorialize about the eligible brides. I remember one of these fans writing that they couldn’t understand why everyone loves Nami –  she’s so much harder to romance than the other girls, because she doesn’t like flowers!

This amused me, because I too was way into Nami, and it probably had something to do with the fact that she doesn’t like flowers. There were three brides in the game: The Gentle One, The Friendly One, and The Loner. Nami was the loner. You had to work a little harder to get presents she liked, and you had to be a bit luckier to trigger the cutscenes that advanced her storyline. It still wasn’t rocket science (or seed hybridization, for that matter), but in comparison to the other romance options, she made you work.

That I fell for Nami is no surprise. I’ve always been into characters who make things difficult: rude, unpredictable, and hard to impress. First there was Karen in Harvest Moon 64, onwards through Nami and then Luna in Harvest Moon: Tree of Tranquility. When I discovered Bioware, it was the taciturn jerks of the Sten/Fenris/Wrex/Jack variety. I spent unnatural amounts of time in Oblivion trying to get good-looking guards to like me despite being the most notorious thief in the land. Naoto Shirogane nearly gave me a heart attack. Now it’s Kasumi in Shira Oka: Second Chances. The game tells me over and over that I can’t get things to turn out differently with her,  but I don’t believe it. Like a sucker, I only get more determined as the evidence mounts.

It’s the same story again and again. Every time a character pushes back against me, I get more obsessed with them. I tend to be indifferent to love interests in games until they snap at me, argue with me, or scorn me, at which point I begin chasing them to the ends of the earth. I had no time for Alistair until he exploded at me after Redcliffe, and I fell for Zev during our arguments in Orzammar and the Deep Roads. Same goes for every NPC I ever felt seriously attached to. I’m never satisfied with characters until I get a fight from them.

So yeah, maybe I’ve got problems. I have a masochistic impulse when it comes to games, and I like it when they make me feel bad. That’s me. But listen: let me tell you the warmest, happiest moment I ever experienced in a videogame. It was when I landed on Tuchanka in Mass Effect 2, and Wrex sees me, yells “Shepard!” and shoves his toadies out of the way to come in for the deadliest chest bump known to man. It wasn’t a big thing, but I don’t think I’ve ever been happier to see a fictional character. After all the arguments, the disobeyed orders, that one time we almost killed each other, goddamn but that ornery bastard was happy to see me.

That’s definitely part of it. A buildup of frustration can make a victorious moment sweeter. When Liara’s happy to see me, it doesn’t register: she loves Shepard no matter what. Wrex, however – things can go wrong with Wrex. So when they went right, it felt like I’d achieved something. Part of loving difficult characters is just loving the victory of getting through to them.

I don’t think that’s the whole answer, though. There’s something a little more subtle happening as well. When unwanted things happen to me in a game, my instinct is to come up with a theory to explain why. I update my mental model of the game so I can avoid this failure in the future. Likewise, when a character does something I don’t want, I update my mental model of the character. If a character keeps doing things I don’t want, I keep updating. In the end, I have a bigger and more complex mental model of a difficult character than I do of a simple one. It doesn’t matter if the actual game representation of the character is complex or not. That’s just how my mind works.

Put another way, the more a character pulls away from me, the more vividly I imagine their inner life. Liara seems like an open book to me, while I imagine Wrex is keeping all kinds of exciting experiences and opinions to himself. I try to imagine where Nami goes when she leaves town without warning. I obsess over what Naoto really thinks of me.

Characters that like and support me no matter what are easy to model. When a character blocks my intentions, it’s like a whole world of unknown variables suddenly opens up behind them. Their possibility space increases. They’re something to engage with now, not just a static object. And I don’t think it’s just me: everyone thinks Nami is the smart one. Difficulty, as much as good writing or voice acting, feeds the illusion of intelligence and depth emerging from the dead simplicity of a dialogue tree. Disliking flowers may not be the basis for a fascinating personality, but it’s a sign of life.