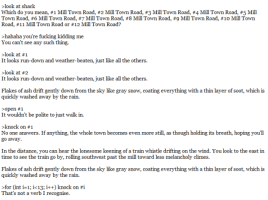 I Am Bad at Interactive Fiction.

Here’s the thing about interactive fiction. I approve of it in theory. A genre with no graphics and huge freedom of interaction seems like the perfect platform for narrative experiments. I love Stephen Lavelle’s work with IF engines, like Blendings and Atopoesis, and I’ve heard great things about Blue Lacuna. But, to my shame, I’ve never been able to play an IF game for more than fifteen minutes without starting to bang my head against things.

The most recent victim of my inability to deal with IF is Michael Gentry’s Anchorhead, a Lovecraft-y mystery kind of thing that got a positive mention at Indie Games Blog. I really did try to give Anchorhead a fair shake, but… things went badly pretty quick. Instead of a review or anything intelligent, I’m just going to present a little diary of my adventures in Anchorhead. I suppose this will be something to point to if I ever need to explain why I don’t really talk about IF games.  Lots of big images and also swears after the jump. I’m not going to give a spoiler warning, though, because I did not advance in the game even a little bit.

At this point the game and I were still pretty much on the same page. High five.

This disgusting flask of floor whiskey became my favorite inventory item, even though you’re only allowed to drink out of it once and even then it takes a bunch of rigmarole to get it out of your pocket and open.

Not shown: half an hour of trying to find the magic keyword that will get this guy to advance the story.

Things were starting to go downhill.

There was a lot of wandering around and general atmosphere. Unfortunately, I kept ruining it.

The rigmarole started getting to me. As did my inability to make any changes in the environment.

In retrospect, this was my breaking point. But look, atmosphere!

This tentacle monster was the first thing in the game to respond to one of my actions the way I wanted or expected it to. As a result, I was flooded with positive feelings towards it. There’s probably a lesson here about interaction design.

My symbolic gesture did not sink in with the other entities in the game, however. Things were getting tense.

My goals were subtly shifting away from trying to advance the story.

“Yuaagh,” Michael explains. Meanwhile the engine continually fusses when I skip the word “the.” By this point the relationship between me and the game is entirely hostile.