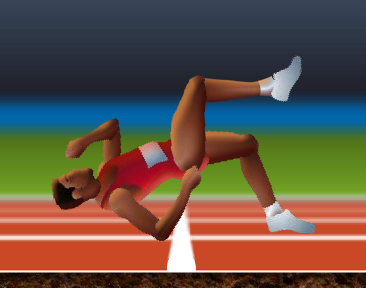 Many aspects of drama are famously difficult to copy directly from other media to games. Game writers are forever struggling with how to create suspense, emotional impact, and thematic consistency in games with grand epic storylines. A similar set of problems are faced in games that go for a comic tone. Just like drama, comedy depends on timing, internal logic, and empathy with characters – all things that pose challenges in game design. The issues with dramatic storytelling generate more commentary, but comedy is serious business, too.

Fairly or unfairly, games are so far not known for doing comedy very well. They had a rather high-profile failure recently with Duke Nukem Forever, which aimed to be funny in a pop-culture riffing, intentionally offensive kind of way, but was generally considered to have missed the mark. For my part, I can’t think of a game that has succeeded at doing this particular type of comedy. Many games manage to pull off some character-based humor, but rarely in a way that involves the player. As with a lot of important dramatic moments, most game comedy gets shuffled off to the cutscenes. There’s nothing wrong with this, but it doesn’t advance the state of the art.

The same comment could apply to Portal, which is rightfully held up as an exemplar of funny games. Portal is hilarious, but the comedy mostly comes from Ellen McLain’s excellent voiceover work, the graffiti you find in the world, and Jonathan Coulton’s end-credits song. Take all of these away and the game plays pretty much the same. It’s all funny, but it’s not funny in a way that only games can be. There’s one exception to this: the companion cube sequence. Here, the player’s actions are an essential part of the joke. The whole scene toys with how easily and irrationally players get attached to things (and poorly drawn characters) in a game, so it’s necessary to create such an attachment in order to make fun of it. That the designers and writers of Portal do so with such brutal efficiency is impressive. The scene became an instant classic for good reason.

This kind of specifically gamelike humor is rare in the AAA mainstream, but it’s not unheard of. (Another example is the scene in Dragon Age 2 where Varric takes some liberties with the narration.) It’s more common out in the experimental and indie world, where designers screw around with conventions as a general rule. There are two broad areas where games have so far been consistently successful at creating gamelike humor: genre parodies, and slapstick. 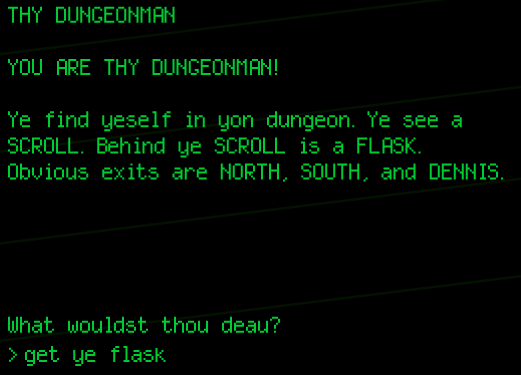 It makes sense that genre parody is a good place to start figuring out what’s uniquely funny about a medium. Genres refine storytelling conventions, and mocking those conventions is one way to draw attention to what’s peculiar about them. The games associated with the web cartoon Homestar Runner are the best examples of this. Stinkoman 20X6 is a Megaman parody where most of the humor is in the cutscenes and style, but the parody is more direct in the adventure games Thy Dungeonman, Peasant’s Quest, and Dangeresque: Roomisode 1. Peasant’s Quest in particular deserves props for embracing the absurd logic of Sierra-style adventure puzzles at their worst without being totally unplayable. It can’t have been an easy balancing act. All of these games get a lot of mileage out of the arbitrariness of what adventure games will and will not allow you to do. It’s an inherently funny thing, which is why the adventure game genre is more associated with comedy than any others. 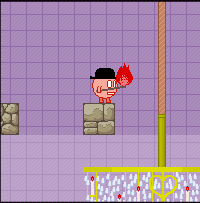 You Have to Burn the Rope

Kian Bashiri’s You Have To Burn the Rope parodies a different genre of games in as focused a manner as possible. It takes the pattern of a modern boss fight, strips it down to the point of absurdity, and makes you play through the result. It’s a funny idea, and also has a funny ending song in the Portal tradition, but the comedy works as well as it does because you probably feel momentarily pleased, then totally silly, after killing the Grinning Colossus. Like the companion cube sequence, this game first manipulates your emotions in a traditionally gamelike way, then mocks you for getting so emotional.

There are theories of comedy that argue that all humor comes from someone in a high status position being brought down to earth (or vice versa). There can be no one higher status in a game than the player character, so it makes sense that a lot of successful game humor centers around deflating the player’s self-image. This is probably why many comic games include a character who makes fun of you throughout, as in Portal. A more direct strategy is to make the player’s avatar actually incompetent. This is where game slapstick kicks in. The ragdoll-driven bouncing of enemies in a shooter can sometimes be pretty funny, as can an enemy blundering into a trap you set in a game like Fallout 3. But to my mind, the really hilarious stuff happens when the player character is the butt of the joke.

Steve Gargolinski’s Hero Test is a game that uses both a barrage of insults and an incompetent avatar to great effect. It’s a risky strategy, though, since it can easily gloss into frustration. It’s funny when you try to jump across a chasm and just miss – the first couple of times. After that, you might grow to hate the game as much as it hates you. Hero Test works as a short, but it’s harder to imagine a full-length game with a bumbling avatar character. I think there could be great potential for a slapstick game in the Pink Panther style, though, where you have a seemingly clumsy character who keeps stumbling into good fortune.

The closest I can think of to something like this is Bennett Foddy’s glorious QWOP, in which you run a race with buttons that control the runner’s thigh and calf muscles. QWOP is hilarious when you fail, and you mostly fail, with your limbs and body flying about in strange rotations. Yet it’s also very addictive, pushing you to break your pathetic record in whatever weird way you can. The rare moments when you do get a good rhythm going, with the runner pushing forward against all physical logic, are worth every contorted crash to the ground after one meter. Something in the design of QWOP allows for a totally incompetent avatar without making you automatically throw the game down in disgust. Some of it is just lowering the bar; if the challenge is to run at all, players will embrace that challenge. But the controls are also designed in such a way that they feel good, almost weirdly natural, when you conquer them. It’s a feeling that’s somehow related to the gracefully clumsy slapstick of Charlie Chaplin.

Figuring out how to make games funny in a gamelike way is a worthy endeavor. Not just because it would lead to funnier games, but also because humor is so hard to do right that advancing game humor is sure to advance a lot of other aspects of games. In the early days of film, comedians like Chaplin and Buster Keaton did a lot of the legwork in pushing the new medium to its artistic limits. Comedians seek novelty, so they tend to be at the vanguard in these things. We can learn a lot from what is and isn’t funny in a game.