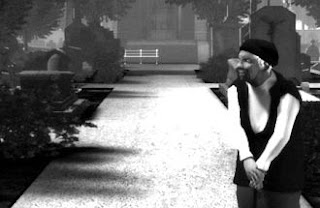 Auriea Harvey and Michael Samyn’s The Graveyard is a spare little game with only one functional object besides your avatar: a bench that plays music when you sit on it. It will start playing music anytime you sit on it and will stop when you stand up. The game takes place in a graveyard, and you end it by leaving the graveyard. This makes for an extremely minimalist implementation of the most basic narrative game structure, in which you perform some scripted action and get a cutscene as a “reward.“

An unusual element of The Graveyard is the pay structure. The game is free to demo, but you can pay for a full version in which your avatar, an elderly lady, is able to die unexpectedly. While this strikes me as a clever art prank, poking fun at the priorities of gamers, it means that the most interesting thing about the game is not really part of the game text, which is just another cutscene trigger.

In an interview with IndieGames, the designers make it clear that they aimed to make a game about death, specifically one that treated death in a less trivial way than they see it treated in games. Whatever noble ambitions the designers may have had, the result feels more as though themes about death have been awkwardly grafted onto a game about listening to music. Execution (review) also sets out to treat death more seriously than games usually do, but it does so by having code that treats death seriously. The Graveyard does so by making the graphics and sound design (both very pretty) resemble a serious movie. And with the pricing scheme, though I still hesitate to include that as a part of the game text per se. And with the bench song, which is a plinky Flemish member of the “here are some people who died” genre. (Perhaps the lyrics have been translated poorly. Still, given the designers’ stated desire not to trivialize death, it’s a startling choice.)

In general, the designers of The Graveyard tend to resort to elements which are not code in order to get their effects across.   There’s no reason that games shouldn’t be enriched with non-game elements, of course.  Perhaps this is just the vanguard of an “Oscarbait” segment of indie games, one which combines conventional structures with moving themes and appealing production values.   However, the flatness of the underlying structure in this case makes for an artistically unsatisfying piece.