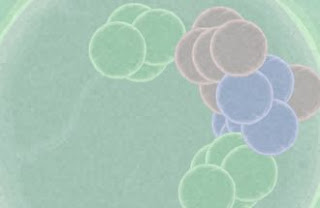 In my review of The Graveyard, I implied that I’m generally unsatisfied by the most basic style of game storytelling: perform an action, get a cutscene, repeat. What I neglected to address is that there are some significant variations in this particular structure, some of which produce unusual narrative effects. One variation is to make the cutscenes more interactive, a popular trend in recent game design. A less common variation, employed to striking effect in Edmund McMillen and Florian Himsl’s Coil, is to break the linear connection between the game segments and the cutscene segments altogether.

The game weaves together two parallel threads: a series of small games about absorption and separation, using metaphors of embryonic development, and a somewhat abstract textual story about a woman’s relationship problems. The story gives some broader metaphorical context to the games, pushing you to see them as representing emotional growth as well as physical growth.

There’s some awkwardness to this parallel structure. But overall, it lends weight to the thematic consistency of the games; they deal with wrenching apart things that are entangled and entangling things which are distant, themes which are attacked from various angles throughout the game. While the games are fairly easy to figure out, interaction and control is often frustrating – another nice metaphor for the painful relationship issues described in the text.

What’s interesting about Coil is that the framing story and the game story are both relatively concrete, but they don’t agree with one another. There are strong thematic echoes, but you can’t interpret the story of the embryo as a literal continuation of the story of the woman. The game is doing one thing and text is doing another.  It’s the combination of these two separate strands that gives the game its emotional heft.

This counterpoint style is an intriguing alternative model for incorporating linear storytelling into a game. Games don’t tell stories in the same way that fixed media like text and film do. There will always be a disconnect between the story in the cutscene and the story in the game. Why not exploit that disconnect?