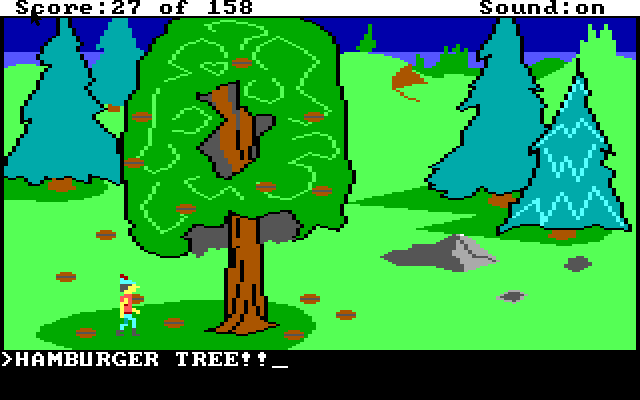 Between 1983 and 1998, Sierra On-Line released an absurd number of adventure games. Recently, GOG.com had a package deal on a major subset of them: the four classic series that shared the “Quest” brand. These games alone constitute a seriously prolific output over the course of fifteen years. Mind you, the focus of this project is not putting these games in their historical context, though I’d welcome you to rectify that in the comments if you can. The reason I snapped up this deal is that this output largely made up my introduction to computer games as a kid, and I haven’t played them since.

In this series, I’ll be playing every single game in the GOG Sierra Quest package in roughly chronological order. (In some cases, Wikipedia doesn’t have the exact release dates, so I’ll be making judgment calls about which of two or three games to do first.) This includes a large chunk of the games I considered the apex of videogames as a kid, as well as some that only showed up long after I’d abandoned the franchises. And in a couple cases, they include games that came out before my time. 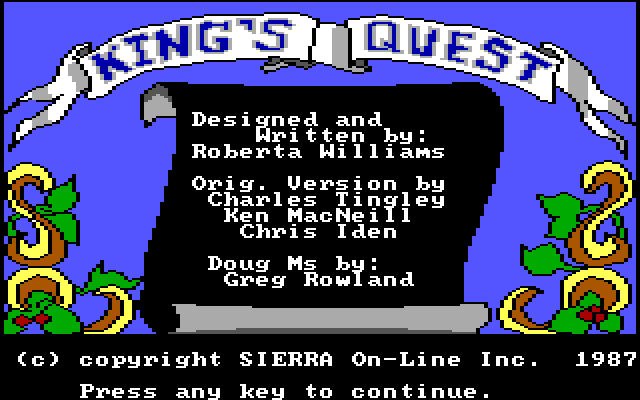 As a kid, I didn’t start with King’s Quest I. We got our first home computer in 1988, when I was six, thanks to a deal IBM had with the university where my dad worked. While the loading screen here says it’s copyright 1987, all that means is that this version represents the fifth rerelease since the game was originally released in 1983, according to Wikipedia. The first game in the series that my family actually had at the time was King’s Quest IV, which I’ll get to when the time comes. I got around to the first in the series later, but only in the 1990 remake version, which apparently made the thing marginally more playable. Naturally, this resulted in a horrified fanbase, and the experiment was not repeated. 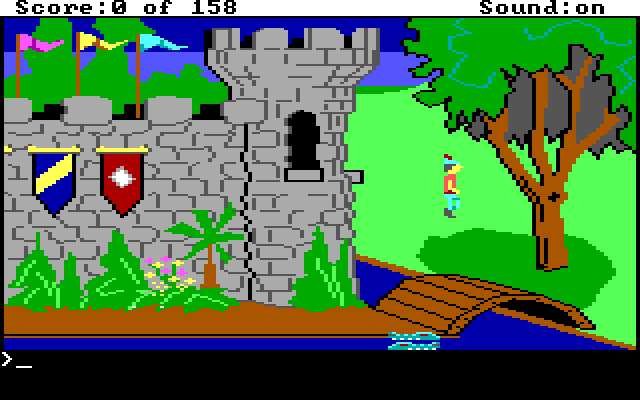 Upon initially experiencing the original interface, my first impression is that Peasant’s Quest fucking NAILED IT. The noodle legs, the color palette, the weird, annoyingly significant-looking trees. No one can pastiche a game like the Brothers Chaps, for real. 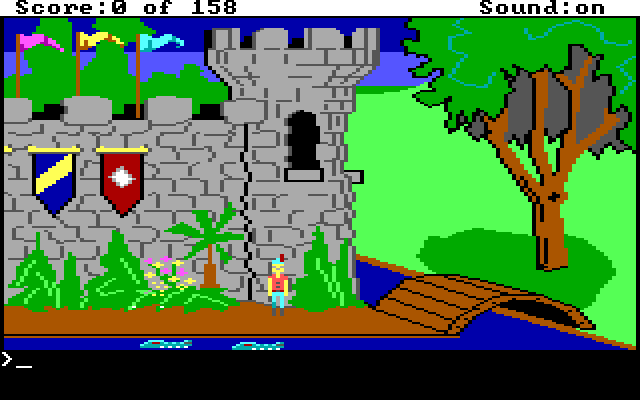 My second impression is that I had to know what would happen if I did the fuckheadist thing possible. 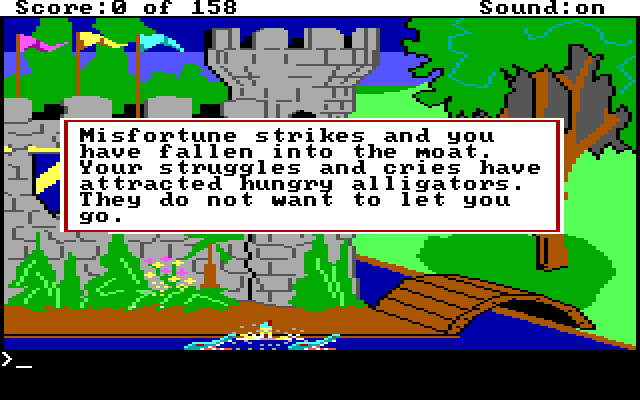 Well, at least I got this over with early on. Time for an alligator-free adventure! 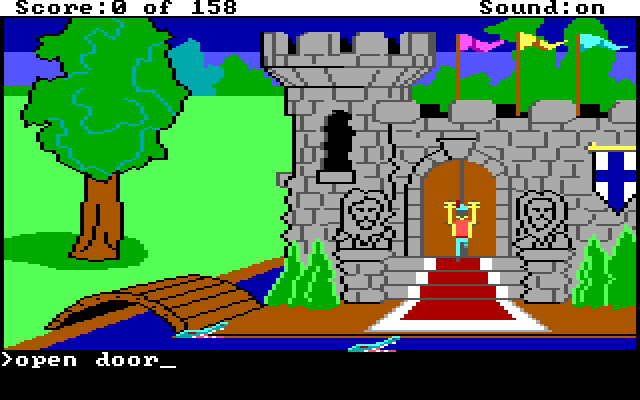 I initially felt it was most correct for me to wander out into the wilderness, an urge possibly shaped by years of other videogames. Nonetheless, I wanted to head straight for the fancy castle, which I felt might be a safer place to hang out. I got a point for opening this door. Achievement culture has deep roots, people. 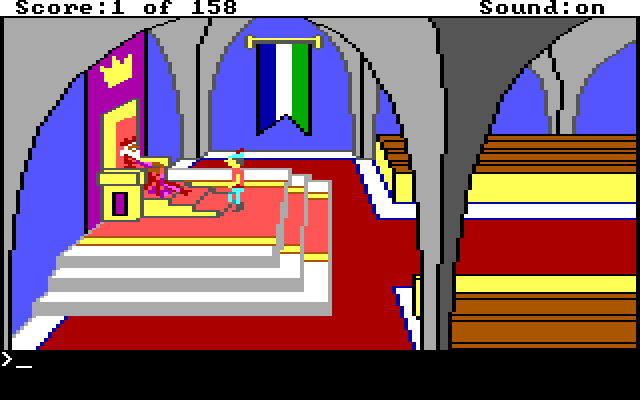 There I met a king. Despite his striking lack of guards or witnesses, my immediate attempts to GET THRONE did not pan out. So I talked to the guy and got some kind of backstory. 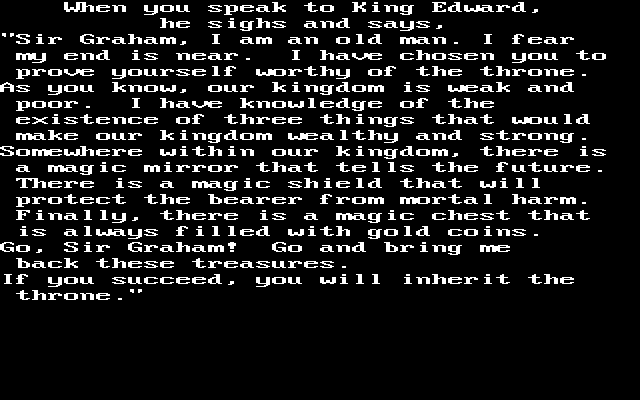 Some kind of backstory. I’ll be honest, I still haven’t read this in its entirety. But there’s something about inheriting a throne in there, which is rad. 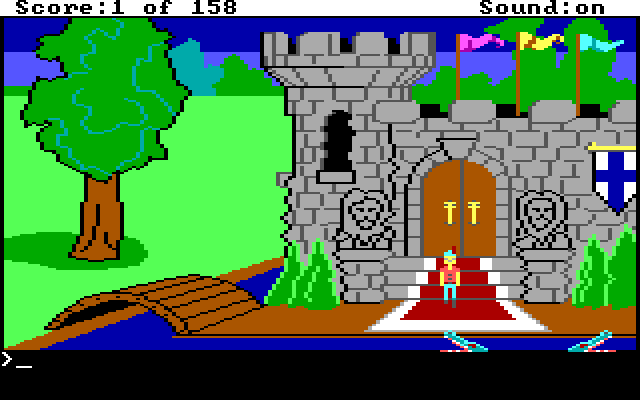 I exited the castle and took a few notes on my initial impressions. This took my attention from the game at a critical moment. What had not occurred to me is that my little dude persists in his motion between screens. If you’re heading south when you exit Screen A, you will continue walking south in Screen B. 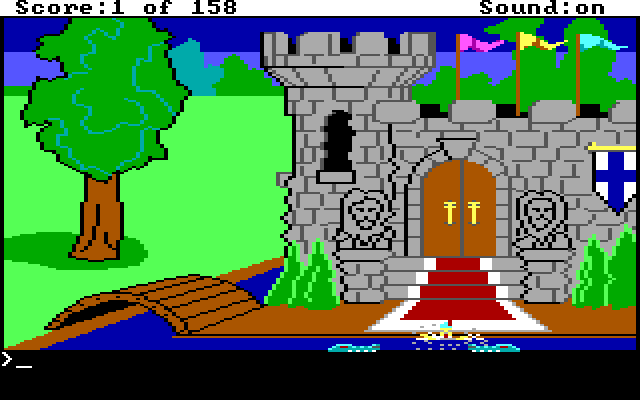 Here’s a thing I’ve noticed about the game so far. I have a well-documented history of poor behavior in the face of text parsers. I expected this to manifest itself immediately in King’s Quest, but it hasn’t. Except in cases where I’m intentionally being an ass for screenshot purposes, I’ve been pretty well-behaved. No attempts to berate the poor parser or have sex with various objects have been in evidence at all. It has me wondering whether I was just over-trained as a young person for the specific text parsers used in Sierra games, rendering me poorly adapted to the broader world of interactive fiction.

In contrast, I have NOT been getting along with the movement mechanics at all. My initial tangles with the alligators were only the beginning. Something I found especially disorienting is how the game handles swimming. 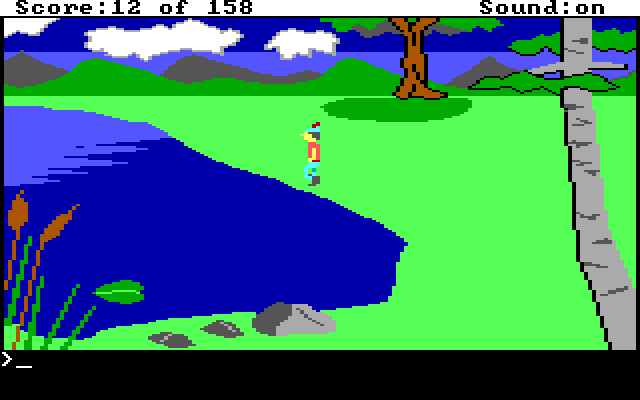 Here’s what I mean. My small pointy man approaches an idyllic pond. 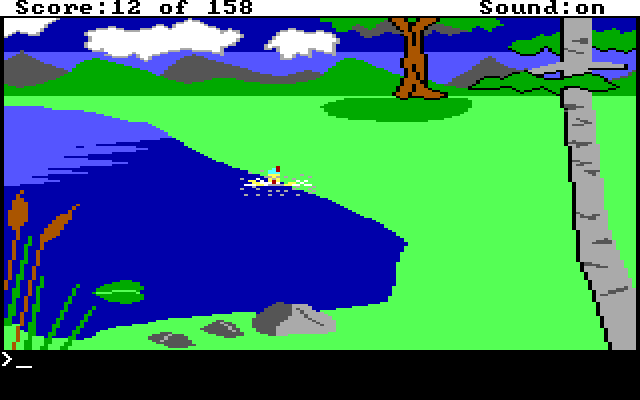 He falls in and splashes wildly like a man being eaten by alligators. 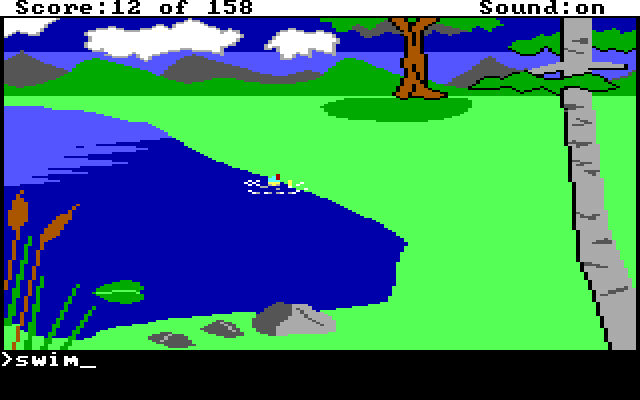 I type a word. 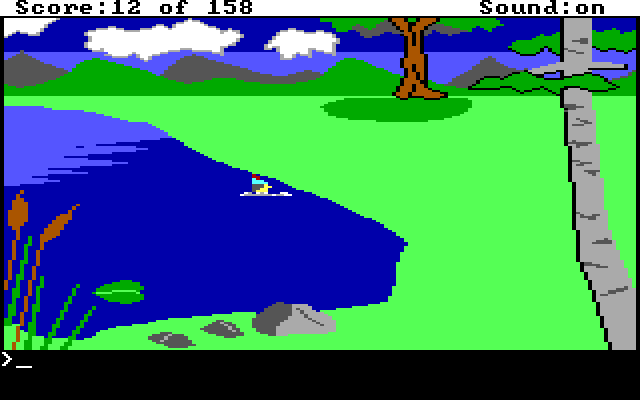 The first thing that bothers me about this whole situation is that it occurred to me to type “swim” in the first place. What in the hell is wrong with me that this seemed like a logical solution at the time. And what in the hell is wrong with this game that it agreed with me? There’s something that seems very unnatural about this mix of typing and direction-key mashing. You’re mixing something verbal and something spatial into the same task. It’s strange. I’m not sure if I dislike it, although it always feels fundamentally unfair to me.

It’s also something that got smoothed out of mainstream design over time. That’s something I expect to see a lot of over the course of this project: strange design choices getting tidied up as developers learn more about how players work. My impression of the swimming style, and other aspects of movement in this game, is that it reinforces the sense that Graham, my avatar, is completely helpless. He’ll just go on walking into walls and flailing around until I intervene with my word of god. Whether intentionally or not, it separates the player from the character; I feel more like a narrator than the hero. It’s interesting, and it’s something that got lost on the way to more usable control interfaces. I will say that being able to type things in while moving caused me no end of amusement.

Anyway, after more or less figuring out how to move, I wandered aimlessly for a bit and eventually found some kind of golden egg. Since I didn’t read the introduction text, I assumed this was one of my rad treasures the king wanted and headed back to the palace to present it to him. 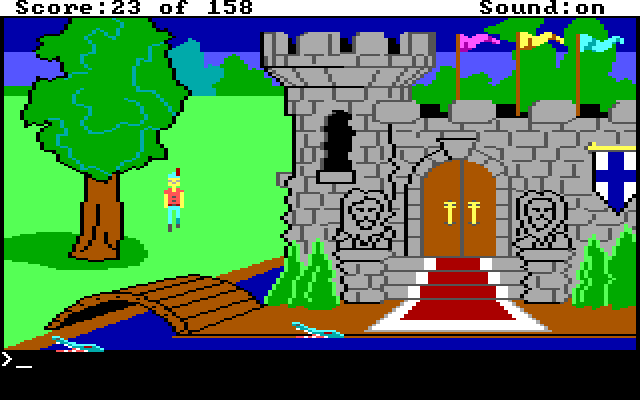 THIS IS GONNA BE AWESOME. ALL I GOTTA DO IS WALK OVER THIS BRIDGE 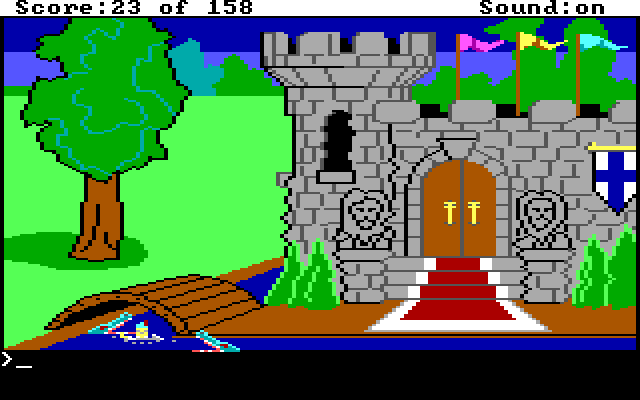 This happened four more times. I kept Twitter updated on my alligator deaths and the peanut gallery started the hell weighing in.

@linehollis Are you sure you aren’t actually playing Pitfall? 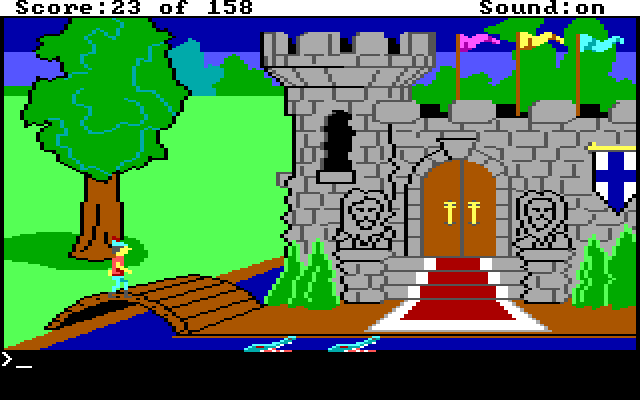 Oh, okay, so here’s a perfectly fine way to walk across this bridge in which my feet are very obviously on top of the planks and not floating in midair or anything. After this I left the palace forever. That stupid egg wasn’t on the quest list anyway. 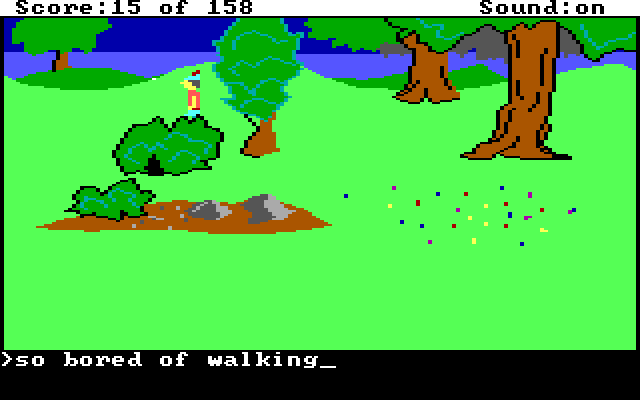 At this point it became clear that my aimless wandering wasn’t working out too great as a long-term strategy and I needed to start making some maps. I spent the next hour or so with a sheet of graph paper and figured the place out. The kingdom of Daventry is a 6×8 grid that wraps around on both axes. I was actually a bit surprised at how tiny it was, but that’s probably for the best considering Graham’s walk speed. Most of it is generic crap like this, but my travels did expose me to a lot more things that can eat me, including a witch, a wolf, and a river. 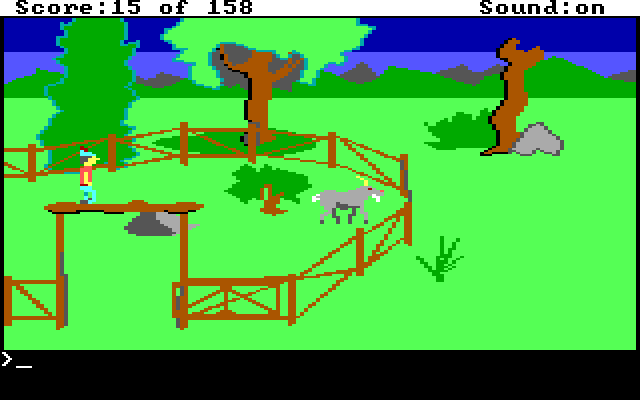 I also met a goat and set it free, in full expectation that this would probably make the game unplayable at some point. I don’t think this is the case anymore but whatever, up with chaos. I assume it got eaten by something. 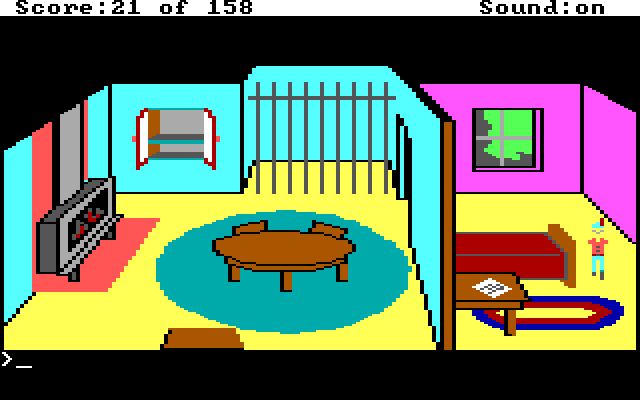 Then I stole some stuff from a witch. This stealth mission was greatly aided by my natural camouflage!

In retrospect, I got through a surprisingly large chunk of the game just fucking around without knowing what I was doing. But I knew this wasn’t sustainable. These early King’s Quest games have an infamous reputation for letting you get right up to the end, then flipping you off for not having picked up a peanut or something six hours ago. I’ve been keeping lots of savegames: 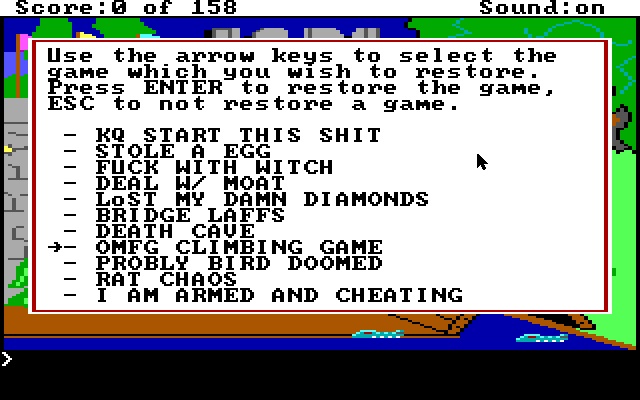 But not really in a rational system or anything. Then this happened. 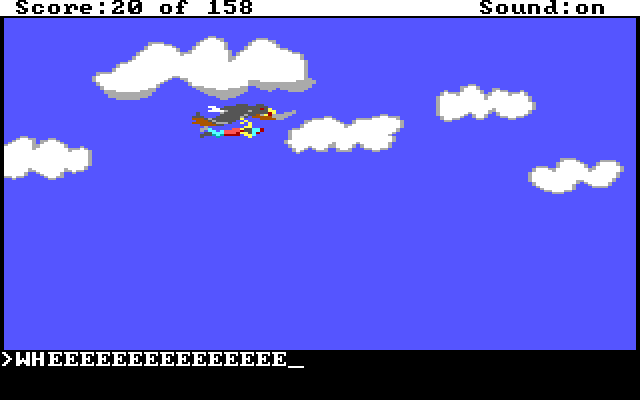 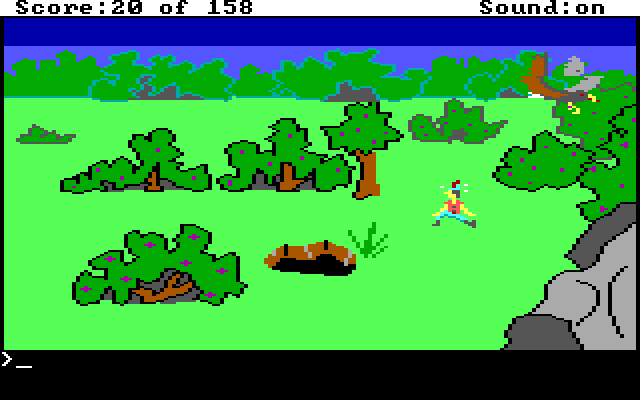 Having been deposited somewhere mysterious in an apparently non-reversible fashion, I started taking the threat of a hard restart more seriously. I’ve got twenty-five damn games to get through and I’d rather push on through the Primitive Era. So I finally brought out the walkthrough. 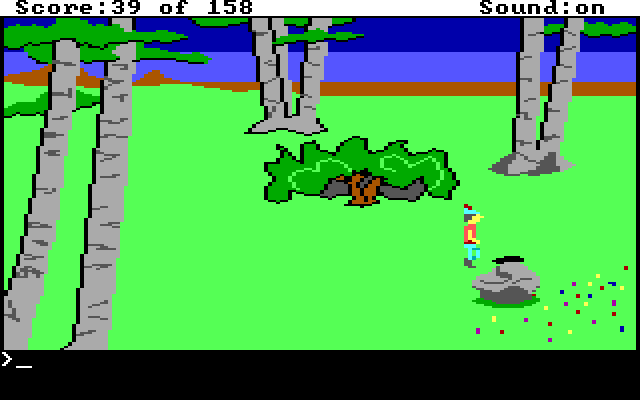 Immediately I found several eye-opening things, such as the fact that this rock that looks like every other rock is actually concealing a vital dagger. Well of course! You know, people talk a lot of shit about the poor game design of the convoluted adventure game puzzles of yore. But I distinctly remember that Sierra had a hint line that charged by the minute, so making this shit unsolvable sounds like great design to me.

I tied up a few other loose ends that made no sense and started getting my plans together, such as they were. I mean, “find three macguffins” isn’t really something that you can make plans about in the total absence of environmental affordances. So what I mean is I skimmed the walkthrough and grabbed some stuff I needed.

Goddamit, they’re just walnuts. Sorry I mean GOLD WALNUTS, but you have to say “open walnut” to make it turn gold. Which is definitely a phrase I would ever think of writing, ever! 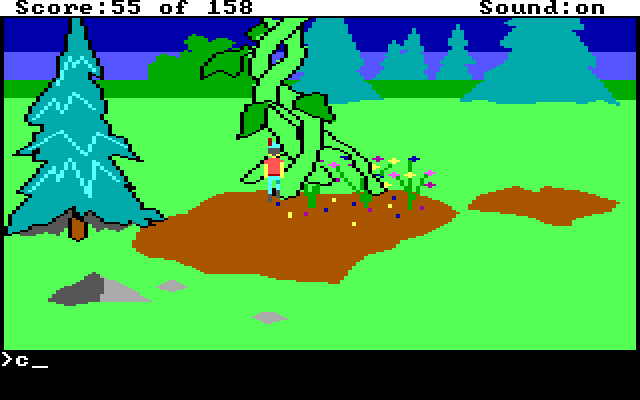 After a bunch of rigmarole I got this fanciful beanstalk to grow out of the ground. A dark memory creeped up into the back of my mind. 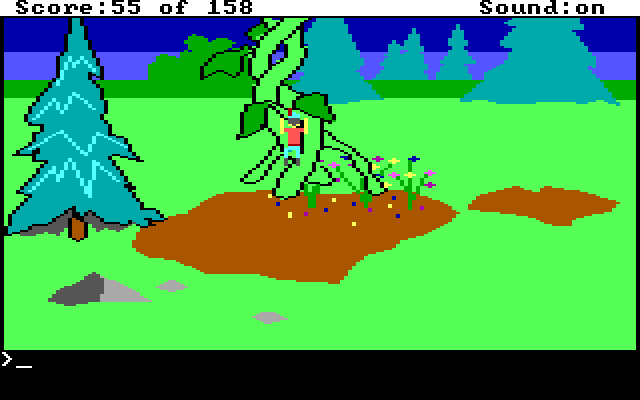 Oh god I know how this ends 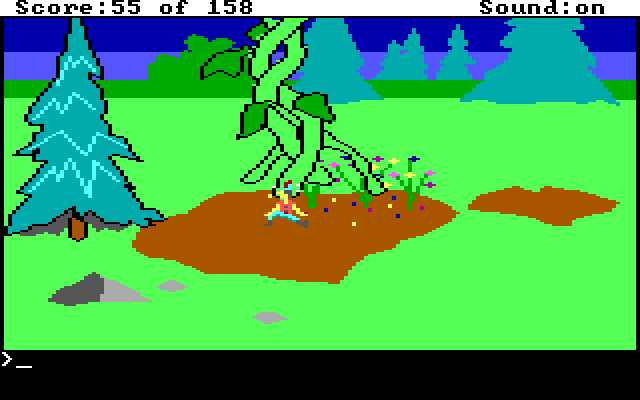 Oh my yes, it’s time to Hit the Pixel Exactly, every time! Why did they DO this in these games. I know for a fact it’s a trend that continues at least up to KQIV. I can only assume it was an attempt to include some Arcade Fun for variety, much as a modern game might have you do a terrible racing minigame FoR vArIeTy!!! This is where I called it a night. Stay tuned for further adventures, unless I just give the fuck up and burn all games forever!