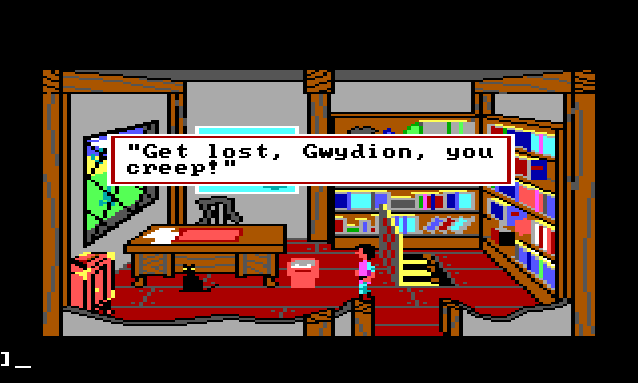 As always, if you want to play along, the first three King’s Quest games are available in a package on GOG.com.

When we last left Gwydion the Magical Orphan, he had turned his evil wizard captor / object of fascination into a cat, ending the first act of the game. The game so far had been such a reliable routine of sneaking around and avoiding Manannan that his defeat left me unsure what to do next. Not to mention emotionally devastated. 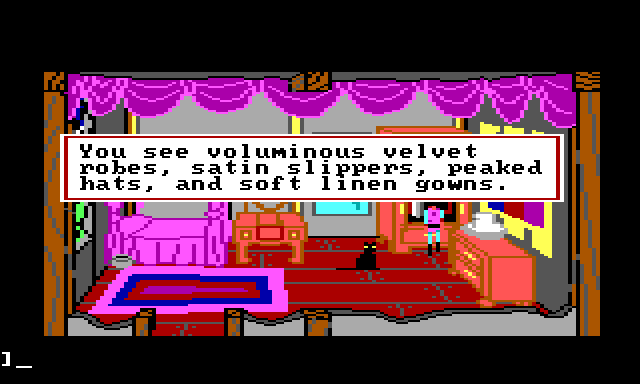 Searching through Manannan’s things while his cat form glared at me left me wistful. I had gotten fond of all the sneaking and the hiding and the chores and the punishments. There was a shape to it that was unusual in adventure games. I worried about the time it would take me to get from point to point. I had to balance risks and rewards: stay out in hopes of advancing a little more before the next pause, or run back before ending up in a broken savegame? Seriously, I was gonna miss all of tha 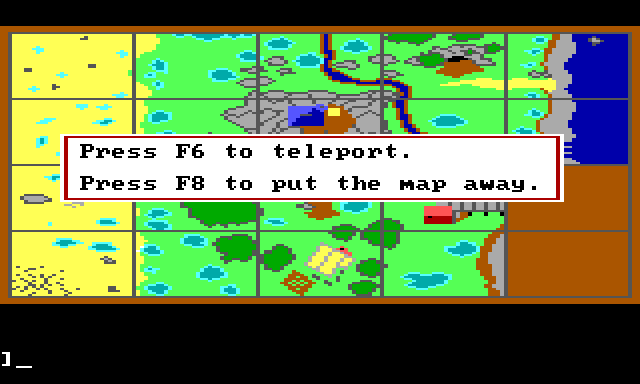 ARE YOU KIDDING ME

I COULD HAVE BEEN DONE IN LIKE HALF AN HOUR

THEN THESE GOSSIPY-ASS CHICKENS GAVE ME A CRAPPY NAME 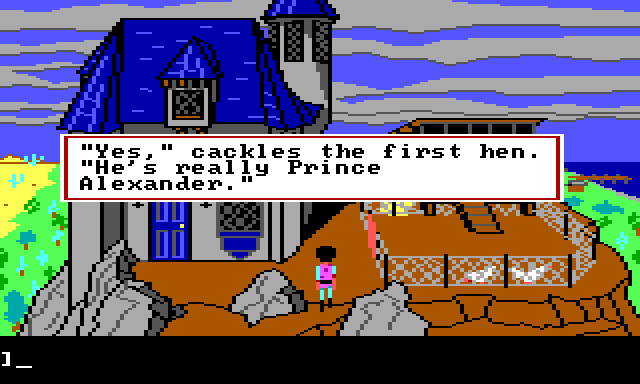 Fuck that. I’ll always be Gwydion in my heart, jerks. It’s time to get out of this hellhole. All I had to do was put together two more spells and my freedom would be assured. To do that, I needed to get into a cave guarded by a giant spider. I had no idea how to do this, so I consulted a FAQ and found I was supposed to use the eagle spell on it. How the hell is that supposed to help– 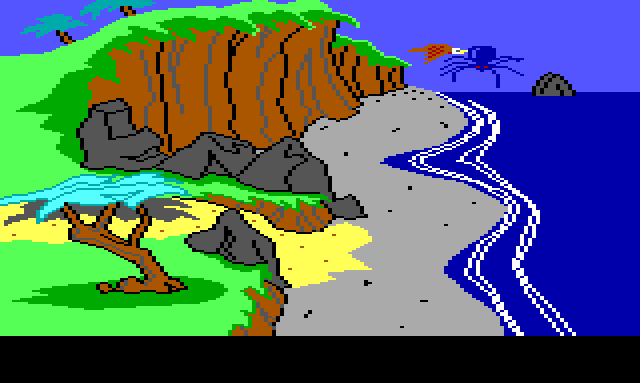 Oh. Well. I don’t want to hit the theme of “puzzle solutions that make no sense” too often, but like. That spider is twice my size and I was planning to use that eagle spell to fly back to Daventry at some point. Plans change, I guess!

But the weirdness of the eagle-spider fight didn’t begin to prepare me for the overwhelming nonsense I would find in the spider’s cave. I struggle to convey what watching this sequence was like in mere words, so I bring it to you in animated GIF form.

You don’t need to read all that. The short form is, someone in a hazmat suit thunders a bunch of entirely new backstory at me while showing me beauty shots of a dragon and my sister bursting into tears. He then gives me a piece of amber and tells me to “use it wisely.”

Well, okay. So the chunk of amber is the last thing I need for one of my final spells. That could just as well have been stuck in a spiderweb, though. Embedding it in an exposition dump makes it look like the writers got halfway through the game, suddenly remembered they needed a new plot conflict, and couldn’t think of a better way to introduce it than “THE DUNGEON MASTER INTERRUPTS YOU WITH A NEW QUEST.”

In many ways this game is a kind of hybrid of the structures of the first two King’s Quest games and the more episodic pacing of Space Quest. The first part of the game feels similar to King’s Quest I and II: there’s a big rectangular map, and you wander around it gathering stuff that unlocks other stuff. As I argued in Part 1 of this recap, KQIII motivates this gameplay better than its predecessors through the in-game explanation that you’re gathering specific ingredients for spells. The timing involved in avoiding Manannan also adds some variation. But in general, it follows the same template.

Hazmat Guy clumsily signals the end of all that. Soon, the game will switch over to an episodic, linear mode to get Gwydion back to Daventry. But first: THE WONDERS OF MAGICK 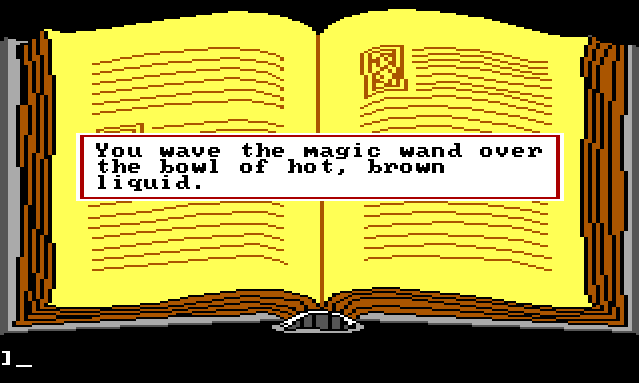 I completed my last two spells: one to summon a storm, and one to allow me teleport. The teleportation spell is unique in that it can be used multiple times. In most cases, the spells in this game are one-shot deals. Later, I would terribly abuse this power.

In the meantime, the non-Manannan cat said its touching farewells, reminding me that it was time to get out of Llewdor. With my eagle spell gone, I wasn’t sure how I was going to pull this off, so I just wandered around for a while. 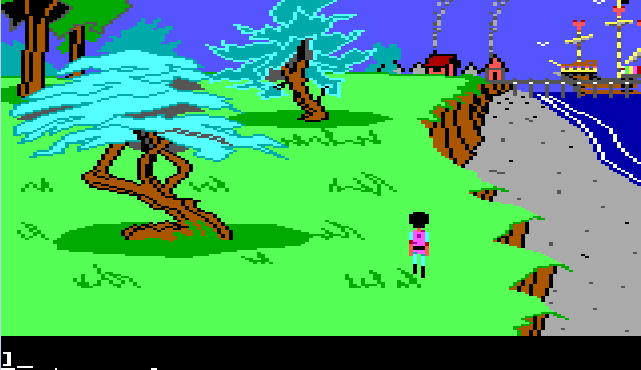 And lo and behold: there’s now a Fancy Boat at the previously-empty docks! In truth I should’ve expected something like this, since KQII similarly introduced changes to the environment following story triggers.

Once I got to the ship I was immediately kidnapped by pirates for ill-defined nefarious purposes. Perhaps a squirrel had suggested to them that I was worth a large, imaginary ransom? They stuck me down in the hold to dick around and try to escape via the tantalizing rope ladder above me. This ambition was to be swiftly mocked. 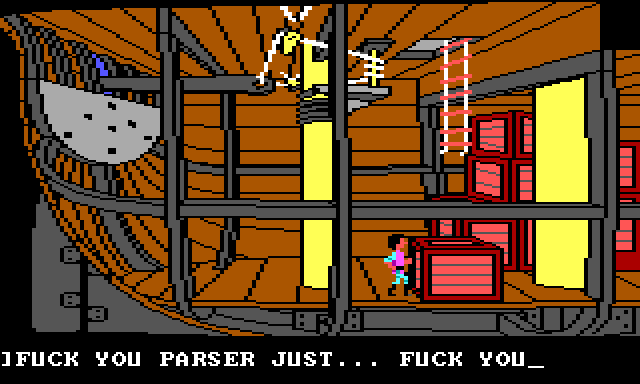 I’ve had my issues with text parsers in the past. To be honest, I’ve been surprised at how little I’ve run into that problem in Sierra adventures so far. I mean, yeah, there’s the whole “GET GADGET” fiasco, but that’s a little different from my problems in interactive fiction games that use the Inform 7 style of parser. Parser issues in Sierra games usually happen when I see something and don’t know how to name it. Parser issues in IF games usually happen when I try to do something and can’t tell if it fails because it’s wrong or because I missed a “the.”

It’s a subtle distinction, but one that makes all the difference in my rage levels. Sierra’s parser kept things very simple, and since I played these games so much as a kid, I probably learned the limited syntax early on. Interactive fiction games, on the other hand, often slightly vary syntax possibilities according to the taste of the developer. Further, as Juhana Leinonen argued in a recent No Show Conference talk, there’s a misleading claim attached to Inform 7 games that “you can type ANYTHING and get a response!” Since this actually means “you can type ANYTHING and get a snarky error message,” all this claim does is make it impossible for new players to figure out the constraints on what they can do. The graphics in Sierra games already help avoid this problem by constraining players to what they see, and the game has rarely made fun of me when I fail. UNTIL NOW. I fear this is an ominous development. 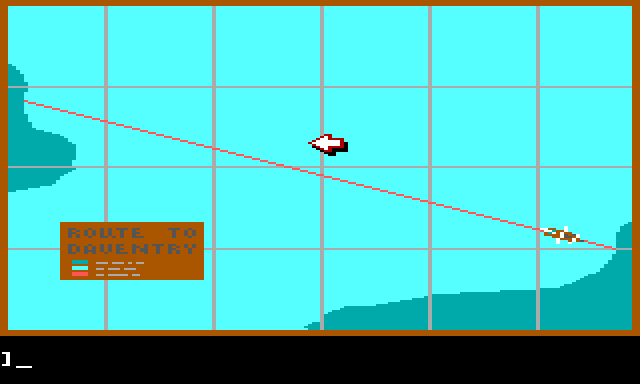 I eventually got out of the hold, only to wander the deck for another twenty minutes while my fancy boat crawled across the world map. I kept thinking there would be something important to do on the boat, but no, I was just killing time, trying not to fall off the deck, and listening to mice talk. The walkthrough claimed these mice would tell me the location of some treasure, but as usual, they just talked about how great I am. Eventually I got close enough to land that falling off the deck became a good strategy, and I swam to shore. 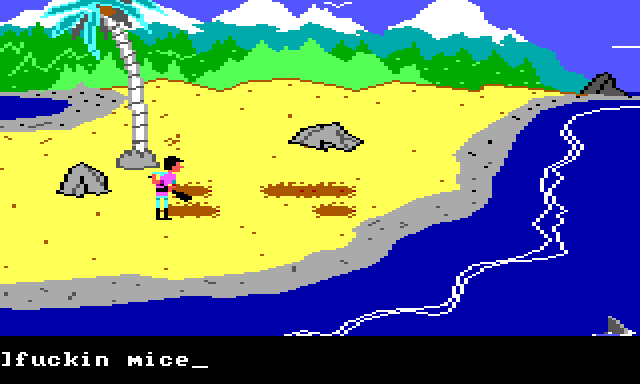 I did not find any treasure there. 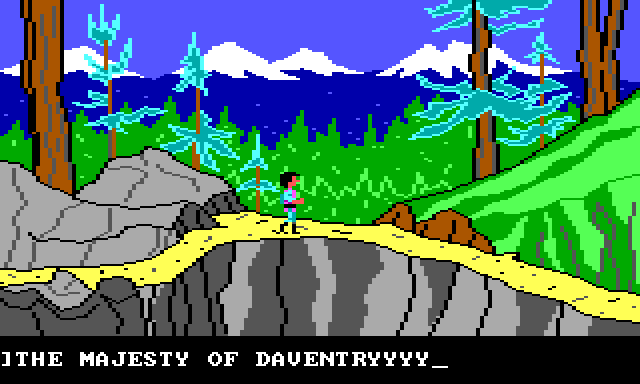 After a bullshit climbing section and an abominable snowman that killed me an absurd number of times while I spammed him with my teleportation spell, I found a road to DAVENTRY WOOO

Appropriately, the road to Daventry is a slightly diagonal mountain path that you will fall from and die if you don’t pay attention. 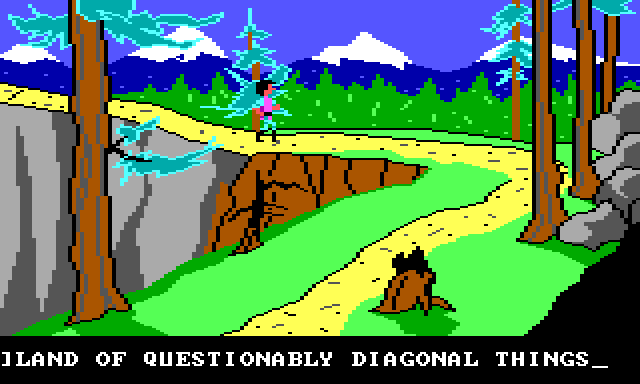 It also features a few burned up tree stumps, which is nice foreshadowing for the shocking development in the next screenshot: 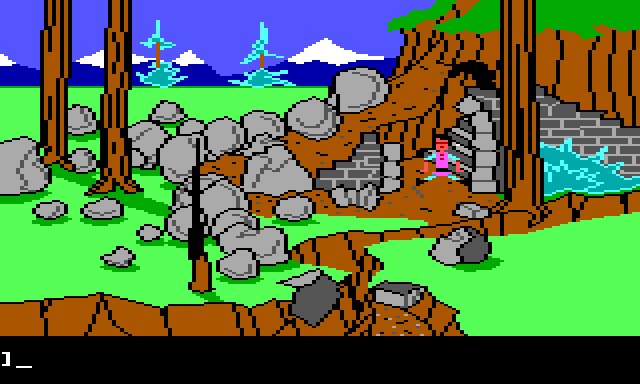 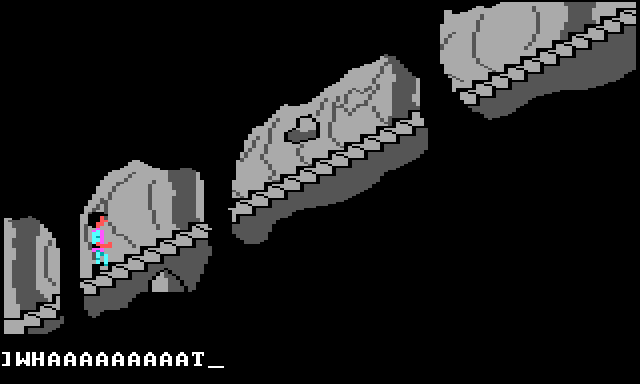 I’VE BEEN HERE BEFORE!

From here on out, most of the environment consists of updated King’s Quest I screens, as Gwydion retraces his alleged father’s steps. For some reason, I wasn’t expecting this, and found it totally charming. 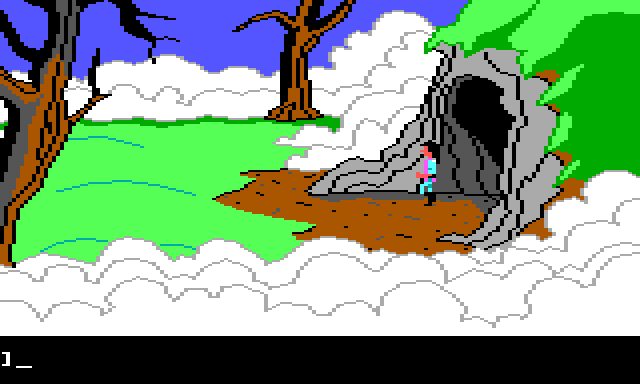 While some of the screens look identical to their originals, like this cloud-surrounded cave entrance, others are all messed up to show the devastation of the Act II Dragon. For example, the forest where Sir Graham made friends with a sleepy, boring giant is now all burninated and has a damsel in it. What did this dragon asshole do with my giant friend?! 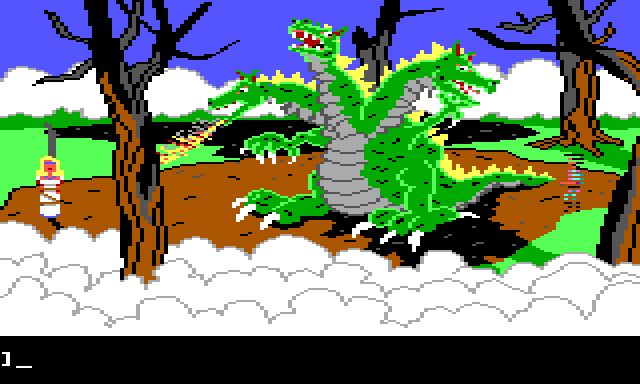 Dragon technology has substantially advanced since Graham’s day, obviously. Fortunately, the offensive capabilities available to the royal family of Daventry have increased in turn. I can turn invisible, see! I can also rain terror from the heavens! 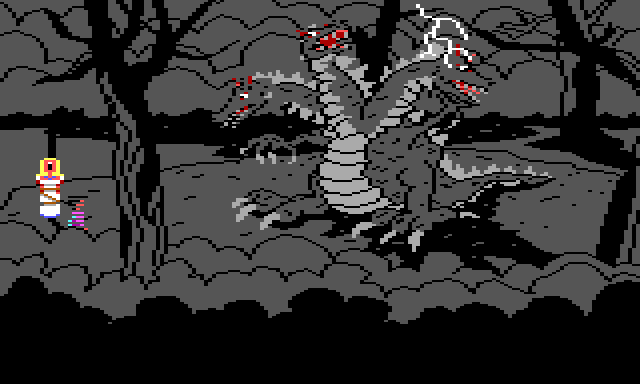 While I remain unimpressed by the characterization of the women of King’s Quest, I have to admit that the animation of this shrieking princess is kind of great.

With the dragon dead, all that’s left is to convince my alleged sister to run off with me.

I already respect Rosella for her completely reasonable skepticism.

Together, the “twins” that don’t even slightly resemble each other go traipsing back through the destroyed Daventry countryside. Eventually we make it back to the castle, where we find the clearest evidence yet of the glory and majesty of King Graham’s rule. 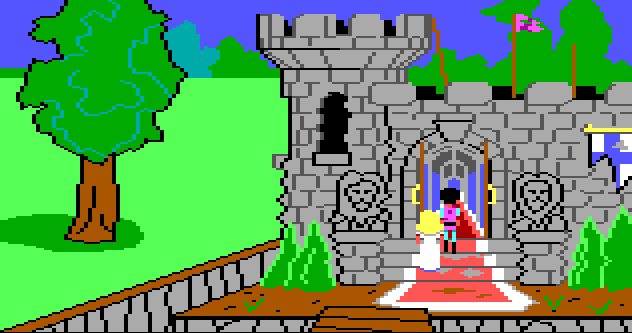 Yes, the kingdom may have been destroyed by a dragon, and yes, he may have gotten his heir kidnapped by a wizard somehow. Yet Graham must have considered his reign a success the second this moat ran dry and its last alligator was shipped off to a zoo or discreet witch. 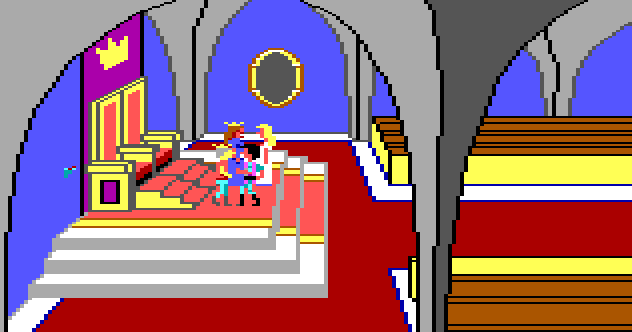 In the end, the royalty of Daventry was “reunited” and everyone was very polite about Graham’s swapped color palette. Unlike Rosella, the King and Queen were immediately accepting of Gwydion. Perhaps King Graham had his own questionably legitimate rise to the throne in mind when he welcomed this orphan with open arms. After all, he did kill a dragon, and he clearly possesses terrifying magicks. Better to have this kid on your side than not.

In the end, Graham officially passes on his legacy by throwing his little Robin Hood hat at his kids, who raise up their arms and then freeze, Police Squad-style, while background animations continue. Who will catch the hat and lead the next game?! You’ll find out after Police Quest and another Space Quest, jerks!

THINGS THAT KILLED ME IN KING’S QUEST III: THE SURPRISINGLY DIVERSE POWER RANKINGS