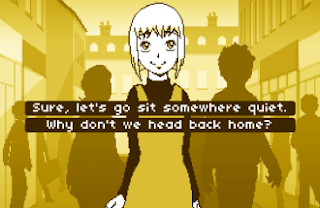 Why is there so little variety in conversation systems in games?  Conversation is one of the most essential and frequent things humans do.  It is a common source of interest, drama, and comedy in both real life and fiction.  It reveals character, it advances plotlines, and it uncovers information.  It’s hugely important to most stories about people.  Yet almost every videogame, regardless of genre, that employs playable conversation uses the same two basic mechanics for it.  Some use one or the other, some use a combination.  These two mechanics are:

Response Triggering. The player employs some kind of trigger action towards another character.  The trigger could be an object, a topic selected from a list, or just the choice to talk to the character at all.  Each trigger leads to a specific canned response from the character.  Employing the same trigger multiple times will usually get the same response.  The order in which triggers are deployed is not significant.

Branching Paths. This is a variation on basic response triggering in which each response opens up a new set of triggers.  This allows for conversations with a temporal progression and usually involves choices about the direction the dialogue takes.

These two mechanics are related, but they reflect two different models of how conversation works, so I think it makes sense to distinguish them.  In Mass Effect, for example, both mechanics are used and are explicitly separated in the conversation interface.  Choices on the left side of the selection wheel are response triggers of the “topic selection” variety.  You can pick them in any order or ignore them all if you prefer.  They generally give you nonessential information  Choices on the right side are branching paths.  If you choose one of them, you both get a response and are taken to a new state in the conversation.

Basic response triggering takes a functional view of conversation.  I want to know about a specific thing, or maybe I just want to know what the character has to say.  It’s a simple transaction: perform the right action, get information in return.

You see this mechanic in its simplest form in Japanese RPGs with a silent protagonist, where conversation is usually just a matter of walking up to someone and mashing A.  This character has one thing to say and says it immediately.  Response triggering is also seen in classic adventure games (where the trigger is something like “talk to X” or “talk to X about Y”).  Some games, like the Harvest Moon series, employ a variation where objects act as triggers.  You can get different responses out of characters by giving them different gifts.  This can be pushed further by treating conversation topics as inventory objects, as in the mystery game Rorschach.  In these cases, finding the right trigger can be part of the challenge of playing a conversation scene.

Response triggering is a dead simple representation of conversation, but it does encourage a good deal of gameplay variety by allowing for different types of triggers.  Branching paths introduces more narrative complexity, but seemingly at the expense of gameplay variety.  I have not been able to think of any case where a branching paths mechanic is controlled in any way other than selection from a visible list of phrases.  Nonetheless, it’s a common mechanic, found in Bioware games, Bethesda RPGs (which are actually heavier on response triggering, but include some branching as well), occasional appearances in adventure games and JRPGs, and story-driven art games like Air Pressure.

Branching paths imply a model of conversation as moving towards something.  They are frequently used when the goal is persuasion, relationship-building, or the demonstration of character (yours or your dialogue partner’s), rather than information.

So that’s it: almost all conversation mechanics in games fall under these two broad categories.  Mainstream, indie, and experimental games alike.  I’ve thought of a few exceptions, but they’re rare.  Isn’t this weird?  Look at the dizzying, massive variety of combat mechanics in games!  Surely conversation deserves such treatment as well.  Instead it gets two pretty similar methods with a host of minor variations.  But where’s the real-time strategic conversation?  The team-based conversation?  Conversation puzzles?  Twitch conversation?

If you’ve come across this post and can think of examples of these or other significant variations, do let me know in comments.  I’ll have more to say later about why I think this is a difficult area for novel mechanics, and about what can be learned from the exceptions that do exist.