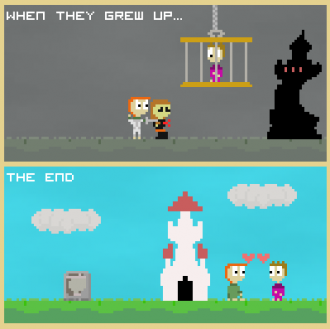 Telling good stories in games is hard. Interactivity screws up a lot of the things we associate with good storytelling, such as pacing, control of the audience’s knowledge, and and suspense. This fact, though generally agreed upon, provokes a variety of reactions. Some argue we’d be better off not telling stories with games altogether; others, that we should make games more like media that are better suited to storytelling. At the same time, many admirable artists are working hard to make games that tell good stories in a gamelike fashion.

Meanwhile, our language for describing game stories remains terribly awkward. Most discussions of how one approach to storytelling differs from another center around two categories: “linear” and “nonlinear.” Games whose stories allow for little input by the player are linear; those that allow for greater flexibility are nonlinear. These terms also apply to gameplay, and are at the center of many acrimonious discussions of what makes a given game good or bad. Linear games, fairly or unfairly, are associated with attempts to be easy or un-gamelike, and so nonlinearity is usually held up as an ideal, or as a straw man to be defensive against.

This is, frankly, a taxonomy born of grievance, and as such is useless for actual critical analysis. We have a fairly clear idea of what makes a linear game: story events are fixed and happen in a preordained order. Nonlinear games, by definition, are everything else. The problem is that “everything else” comprises an enormous variety of games, and discussing them all in contrast to one very specific type of game obscures a lot of significant differences within that space.

It would be helpful, then, to define a little more clearly what we mean by linear stories, and what possibilities exist on the nonlinear side. Let’s assume that a story, in its simplest definition, is just a sequence of events. In most media, that sequence of events is absolutely fixed. Games are unusual in that the events can be made to systematically vary in several ways. Events can happen at different points in time; they can not happen at all; and each event can happen in different ways.

To put this last part in particularly nerdy terms, standard game events can have various parameters. That is, you can have the same event happen in two different playthroughs, but they might, say, involve different characters, or different choices on the part of the player, or end differently. These parameters can range from superficial (your avatar has different armor on!) to significant, and there can be just a couple or an enormous number of them. The more parameters there are, the more unique the event seems to be.

The kind of events that predominate in a game’s storyline are what give a game the perception of being linear or nonlinear, in all the different ways there are to be nonlinear. A purely linear game happens when events are fixed in order, are never optional, and have no parameters. There are, however, a lot of ways you can tweak these factors to create a more nonlinear story. You can have events that are still fixed in time and non-optional, but have some parameters. That can produce something like Daniel Benmergui’s prototype for Storyteller. Mix a couple of these events with some purely linear events, and you get a story like Bioshock.

You can also have events with a small number of parameters, but with some flexibility in terms of order and optionality. Combined with some major story events of the Storyteller type, this gives you something like a Bioware game. A more Bethesda-like story is one where events still have only a few parameters, but are almost totally optional and unfixed in time. If you take that type of event and push up the number of parameters, you get more and more simulation-like. Eventually, this gives you story events like parties and deaths in The Sims.

More parameters and more temporal flexibility make a player feel like they have more control over the direction of the story. It can also make it more difficult to tell a coherent story with a clear chain of causes and effects. Designing events to be flexible in some ways, but constrained in others, can make it easier to fit them logically into a story, and most games known for their stories fit into this middle part of the design space.

Thinking in terms of event parameters can make the distinctions between these storytelling strategies clearer. There’s one type of event I haven’t considered yet, though: events that aren’t explicitly defined by the game at all. Some game stories are primarily remembered for the spontaneous, emergent events that happen. Most events in The Sims games are just semi-accidental results of the simulation, for example. Far Cry 2 is also known for supporting spontaneous meaningful moments. Building a good foundation for spontaneous events, and stringing them together into a story, is a difficult task, but a very promising direction for game designers to explore.

One last possibility is to think about the event itself as a kind of parameter. This is the approach taken in Stephen Lavelle’s Dirty Little Slut. Dirty Little Slut lets the player navigate through a large collection of variations on the Cinderella folk tale by selecting abstract descriptions of story events, like “CHALLENGE” or “ILL TREATMENT.” The chain of event types you choose determines which story gets displayed. A similar approach was used to generate movie scripts in Lionhead’s The Movies. I’d be very interested to see a large-scale narrative game use this kind of approach to select and tune story events in response to a player’s choices, while keeping them within a fixed overall structure. Benmergui’s upcoming expanded version of Storyteller, which treats narrative as a puzzle game, seems like a step in this direction. So far, though, it’s an underexplored area.

What I’m getting at here is that there is a huge design space for storytelling styles in games. Sorting games into linear or nonlinear doesn’t really organize that space in a useful way. More importantly, it doesn’t point towards the interesting gaps in the space that bear further exploration. Analyzing event types isn’t the only answer, but it might make this discussion a bit more grounded.