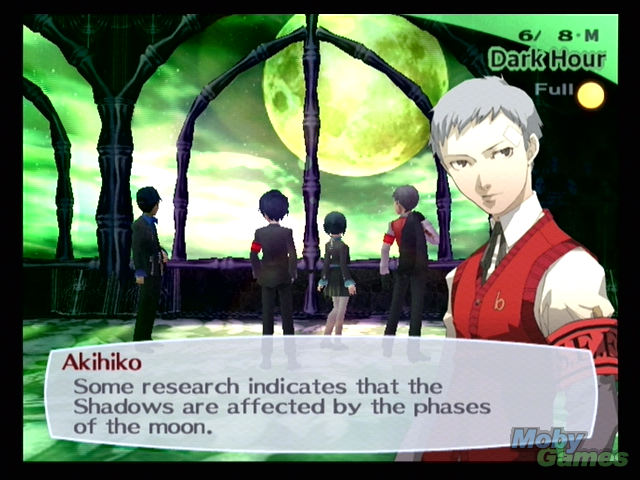 Persona 3: Your relationship seems to be in a rut.

Here’s a new thing I want to start doing. Most of my posts are either reviews of short games, or feature pieces that discuss several games at a high level. As a result, I rarely get a chance to write about the long games I play in any depth. In order to improve on this state of affairs, I’m going to start doing playthrough posts on the feature-length games I play. I’ll just check in from time to time and record my impressions along the way.  As with everything else on this blog, this will naturally involve major spoilers of the games I discuss.

It’s a little awkward to start this now, since I’m near the end of the two games I’m currently playing, but oh well!  In the future, I’ll start out each playthrough with some context about the gameplay and such, but it’s a bit late to do that now. So this will basically read like I expect you’ve played the game already. Anyhow, I’ll start by talking about Shin Megami Tensei: Persona 3 and how it’s been going for me so far.

I bought Persona 3 in the first place because I played Persona 4 last year and it pretty much fucked my head up. As may be obvious from the rest of my blog, I really enjoy that sort of experience, so I picked up the earlier game when it was on sale and kept saving it up for a rainy day.

I was a little nervous going backwards in the series. Often, that just feels like someone took a game you love and did some inexplicably terrible things to the interface design.  Fortunately, it turns out there are very few differences in the game engine between the two games. The main thing is that you can’t control your other party members, which is occasionally frustrating but not as bad as I’d feared. And it’s a stylistic decision I respect, in any case. It just makes all those game-changing super-items kinda useless, since only one character is capable of using them, but whatevs.

So the gameplay is just as fun, and the combo attacks are a nice way of using the personas that I miss in the sequel. But so far, Persona 3 hasn’t dug itself into my head the way 4 did.  Mostly this is because I just haven’t fallen for any of the characters yet. Romance is a big part of the gameplay here, and none of the lovely ladies have really grabbed my heart the way a couple of the characters did in 4. The end result is that my character this time feels a bit more coldhearted, which is not a bad thing. But it’s different.

At the moment, I’m pushing towards the third to last Shadow (not that I expect the endgame to be as well-organized as they’ve been implying so far) and tentatively romancing Yukari. She’s kind of a jagoff at times, what with all the carelessly getting herself into scrapes and ignoring me until I’m sufficiently popular.  But I’ve come to respect her character more over the course of the game. I like that she’s the only other person who thinks the whole central storyline is kind of insane and not necessarily a good idea. Everyone else seems so passive.

Of course, telling a story primarily through a bunch of parallel, disconnected character arcs is one of the things that’s so distinctive about these games. I think they’re trying to emulate a more TV-like storytelling style: there’s a main plot, and important things happen in it at certain intervals, but a given episode might focus on character building, or have a few short subplots going on, or just be a one-off about some shenanigans at the beach. The Persona games are most obviously inspired by the type of anime where a bunch of teenagers have a bunch of TEEN DRAMA and then fight some demons at the end of the episode, but it’s a similar structure to American genre shows like Lost or Star Trek.  It works really well in a long RPG, and I wonder that more games don’t copy it.