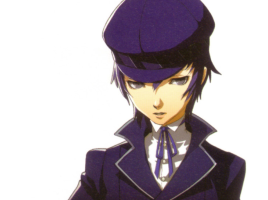 Playing Hard to Get 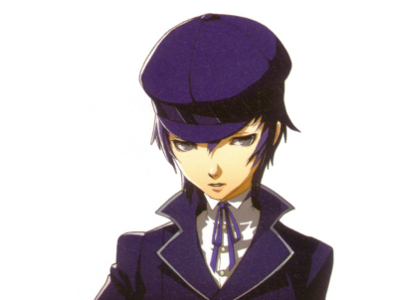 I have not been fully honest with you. I’ve put off addressing an elephant in the room, and it’s got to do with objectification. In my last post, I talked about the ways that different difficulty types can express personality. I gave these types cute little titles, like A Hard Read or High Maintenance. Of course, when these phrases describe real people, they usually describe someone who doesn’t desire the speaker as much as they supposedly should. And “someone” is usually a woman.

I love difficult characters. At the same time, I know there’s something a little uncomfortable about why I love them. The impulse to win over someone difficult is a conqueror’s impulse. It’s the desire to be the one special person who sees through a rough exterior to the diamond underneath. This impulse has not had happy results in my real life. It’s a selfish approach to relationships that tries to convince the other person that they couldn’t get by without you.

Take one of my very favorite difficult characters: Naoto Shirogane from Persona 4. My character’s relationship with Naoto followed a certain type of romantic comedy arc up to a point. My PC, who doesn’t appreciate intellectual competition, hated him at first. Following shared harrowing experiences, they grew more sympathetic towards each other. Finally, my PC became obsessed with winning him over. Pride and Prejudice, more or less.

I can rationalize my character’s motivations all I want. The dramatic switch really happened because Naoto was clearly the most difficult NPC to romance. You get less time to build up his Social Link and need higher stats to begin the Social Link at all. That drove me crazy. I was curious about pursuing the relationship to start with, but as soon as I got shot down by his stat thresholds I dropped everything to pursue him. I’ve gone through versions of this story with other NPCs, but Naoto’s was the most dramatic shift.

Many game players, as you may have noticed, tend to believe a preference for difficult things reveals a superior moral fiber. For example, I implied in my first post this month that I like difficult characters because they seem deeper. I find this view appealing at a gut level, but it doesn’t explain my interest in Naoto. He wasn’t even playable until late in the game, so I already had a model of his personality before difficulty mattered. What’s more, Naoto’s characterization became much less convincing at that point in the game, and I knew it. No, the challenge is what got to me: he became another hard nut to crack.

Difficulty can convey aspects of a character’s personality. More broadly, though, designers use difficulty to communicate the value and desirability of a game object. More effort brings more reward, if the game plays fair. You knew Knights of the Round would be the best summon in Final Fantasy VII because it was the hugest pain in the ass to get. People respond differently to fictional characters than inanimate game objects, but they often make the same association. More difficult characters are more valuable ones. This gets weird quickly, for a lot of reasons. 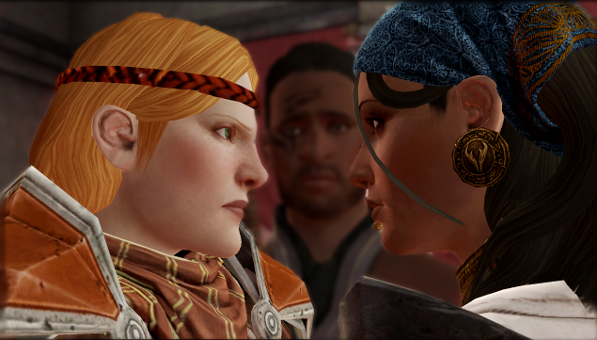 Aveline and Isabella of Dragon Age 2 engage in discourse about constraints on female sexual expression in a patriarchal society.

Treating characters as objects with varying levels of attainability brings up a lot of pernicious sexist tropes. My personal obsessions may span genders, but let’s get real: most of the games I talk about are dating sims, and most of the characters in question are women. “Hard to get” and “easy” mean very particular things when applied to women. They mean that women are objects to be won, and the difficulty of winning them reflects their worth. They mean that women are punished for expressing sexual desire and men are rewarded for landing an unwilling catch by any means necessary. Even when I chase after male characters, I internalize this same bullshit as the narrative template for thrilling romance. It goes back to the romantic comedy tropes I was reminded of by my Naoto story. Fiction almost always presents more willing partners as deceptive or undesirable and unwilling partners as virtuous. Difficulty marks value.

When writing this, I wondered if I’m the only one who gets this weird about difficult characters. Do other players value more difficult characters more highly than “easier” ones? It’s hard to answer that question without access to gameplay data. Still, I came up with a quick and dirty test for Harvest Moon: Tree of Tranquility, a recent entry in the Harvest Moon farming/dating sim franchise. Tree of Tranquility makes a good test case because it has an unusually high number of eligible spouses: 16 altogether, half male and half female. (Existing in a strictly heteronormative universe, each character can only be married by a player character of the opposite sex.)

Tree of Tranquility is also handy because I came up with a way to quantify the difficulty of the characters. In Harvest Moon, you mainly increase an NPC’s affection towards you by giving gifts. Each NPC has a unique list of gifts that they Like (which get you a small affection bonus) and gifts that they Love (a bigger bonus). Every gift can be sold on your farm as well, at varying values. Besides the gifts, the actions you take towards marriage don’t change much between characters. Therefore, you can roughly rank characters in difficulty by taking the average cost of the items on their Loved gift list1. Measuring how much players value the characters is trickier. I figured I was mainly interested in how engaged fans are with the characters. So I checked each characters’ popularity in fanfiction by counting Google hits for “tree of tranquility fanfic [character name]”. Not perfect, but not a bad way to index how ardent each NPC’s fans are. A relationship between gift value and fanfic hits would provide evidence that people value expensive characters more. The results: 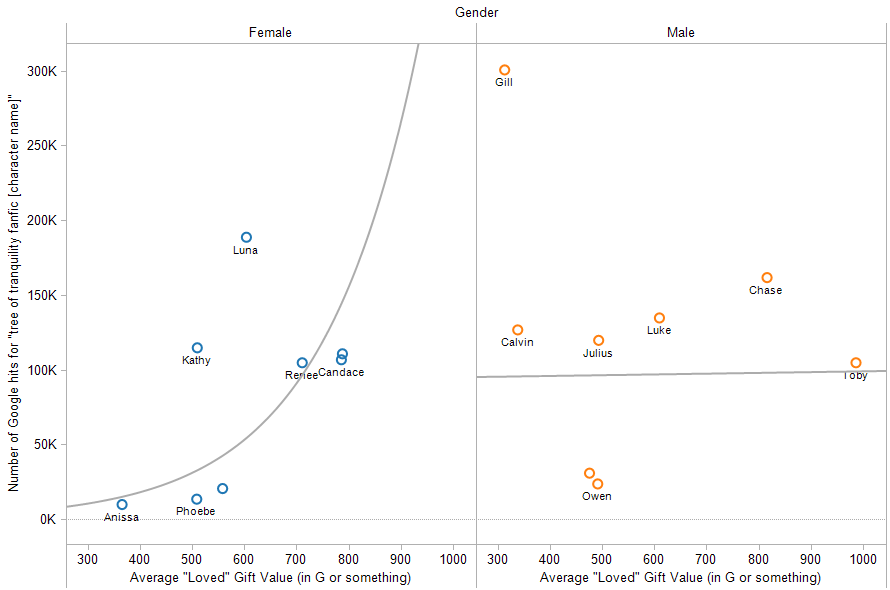 For women, the results show evidence for a relationship between expensive tastes and fandom popularity. (Details: I fit an exponential model to Gift Value vs. Fanfic Hits with Gender as an additional variable, and the overall model has an R2 of .37. Not great, but near significant on the female side, which is something considering the small N.) The more expensive a bride’s tastes, the more fanfic she drives. Grooms fail to show the same relationship, with some caveats2.

This is just one data point, if an unusually convenient one due to the high numbers. But it supports the idea that people judge the value of characters, especially female characters, by their difficulty level. Beyond personal preference, the desire to get the highest-status prize drives some amount of players’ interests. This tracks with my anecdotal experience of how fans of Harvest Moon games talk about and rank the dating prospects. Associating higher costs with a character is a simple way to add difficulty, but even that seems to affect responses in this case. I don’t think it’s implausible that other types of difficulty add value to characters in similar ways. Moreover, adding value this way will always depend on crude objectification of the characters in question. What we’re seeing here are the first steps towards a particularly gamelike appropriation of awful romance tropes.

So can writers avoid objectification when creating interactive characters? Anytime difficulty differs between NPCs, there’s a chance players will read differences as value markers and drag in problematic tropes. Even if the difficulty doesn’t actually vary, people can still perceive differences. Good writing and design can complicate things, but it can’t always overcome structural implications. Even with a game as lauded for its character writing as Dragon Age 2, players still talk about Merrill and Isabella in virgin/whore terms. Perhaps the answer is to make goals associated with characters more ambiguous. If all you can do is marry characters or make them better companions, rankings will appear more obvious and objectification easier. More flexible goals and strategies means more room to see NPCs as fictional people instead of prizes.

1 Harvest Moon nerd corner: I left the Shining Baumkuchen out of these calculations, since it’s on every character’s Love list. Lists were taken from DetroitDJ’s Gifts Guide. Item values from a variety of FAQs, mostly also from DetroitDJ. Rock on, DetroitDJ.

2 I’m being a bit conservative here by considering only the actual difficulty of characters, not their perceived difficulty. Gill might be an outlier because the in-game hint guide says he likes tomatoes, gold, and silver, so he looks like a fellow with expensive tastes. In reality, all his Loved items are tomato-based, which came as a surprise to me. Similarly, Luna is presented as a fashion maven, and would have been my initial guess for the bride with the most expensive tastes. Toby, on the other hand, looks like a grungy hippie. But being a simple man of nature, he loves fish, and good fish are among the most valuable items in the game. Sorted by perceived difficulty, this relationship might look much different, but that’s not so easily quantified.