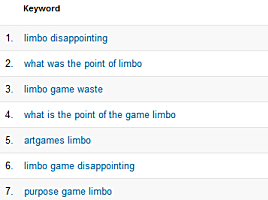 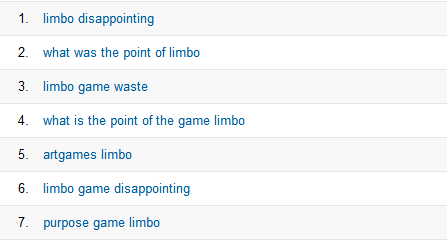 People come to my site via Google for all kinds of reasons, be it wanting to see Fenris naked, intense fury at having played through Limbo, or wanting to see Isabela naked. Every once in a while, though, someone lands at my joint with a search string that suggests deeper questions in need of an answer. In this new feature, I will try to provide those answers to the best of my limited ability.

It’s shenanigans, and its purpose is to patch up some awkward implications of classical Christian theology that would lead to babies being on fire forever.

Yuka-DAMN writes, “do you get laid in persona 3”

Yeah, I know the game is kind of coy about it, but let’s be real. You’re going to tell those other jerks you did no matter what. Might as well add it to the headcanon while you’re at it.

If only you damn kids could pull yourselves together and do your pointless assignments on time, you might find a kindred spirit across the room one of these days.

I’m pretty sure he shoots with his right hand. Sorry for your oddly specific fetish, friend.

Look, people, I don’t know what to tell you. Just don’t swallow.

Keening in Kirkwall writes, “what is really happened to the champion in dragon age 2?”

Contrary to the unconvincing testimony of Varric Tethras, the so-called “Champion” was really one of the Viscount’s personal bodyguards: a career soldier who had lived in Kirkwall her entire life. Like the other bodyguards, she found herself unemployed after the Qunari slaughtered the entire ruling family during their assault on Hightown. Unlike the others, she had the luck and distinction of being the last person to strike a blow on the Arishok during the bloody melee that followed. With several noble families vying to fill the sudden power vacuum, the Merchant’s Guild had the bright idea to put forth a candidate of their own. Lo and behold, the soldier who had “slain the Arishok in single combat” was now conveniently revealed to be the scion of the forgotten Fereldan branch of a once-powerful noble family, the Amells. (It is true that the last living Amell eagerly claimed the soldier as his long-lost niece. It is also true that many of the gentleman’s gambling debts appeared to vanish around this time.)

Even with all the thrilling tales being told about her, such an upstart would hardly be considered first in line for the Viscount’s throne. However, the Merchant’s Guild proved adept at staining the other noble families of Kirkwall with increasingly outrageous accusations of hidden blood magic. Ironically, Tethras and the Guild themselves formed an alliance with a group of radical mages to eliminate the last remaining threat from the Templar Order. After blaming the mages for the takeover, the Guild and their puppet Viscountess were left with no remaining competition and apparently clean hands. An era of brutal capitalism in Kirkwall had begun.

Man, have I ever been there.